Does hydrogen have a future in the auto world?

Part 3 of 7 in an exclusive new series.

Hydrogen fuel cells used to be in the news a lot… but what is the likelihood that they’ll be a profitable development for the aftermarket? 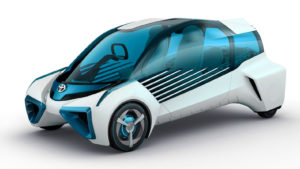 Toyota FCV Plus hydrogen concept car reveals the automaker’s vision of the future.

Way back in the early naughties, I spent two years in Japan working in the product planning division for Toyota Motor Corp. During a required entertainment day for journalists visiting the Tokyo Auto Show, we were all treated to a ride in a Highlander Hydrogen Fuel Cell prototype. The car was quiet, serene and really quite unremarkable – until you remembered it wasn’t petroleum powered at all. That was pretty revolutionary for 2001.

It was early days, but Toyota had big dreams for hydrogen, and it still does, having recently launch the strangely-styled Mirai fuel cell electric vehicle.

However, the world today is a very different place from 2001. The coming of electric vehicles, typified by Tesla and to a lesser extent, the Nissan Leaf, have driven the recognition, respect and desirability of electric vehicles to a whole new level, greatly challenging hydrogen as the ‘green heir’ to petroleum, the current energy king.

So what exactly is hydrogen? And what’s the deal with fuel cells?

Hydrogen is the lightest element on the periodic table, as well as the most abundant element in the universe. A key component of water, it was first discovered and isolated in the 18thCentury and has been in use ever since. Hydrogen is highly flammable and was actually the power source for one of the first internal combustion engines early in the 19thCentury, as well as street lighting and heating.

There are quite a few different ways to produce hydrogen, with the most common being electrolysis (passing an electrical current through water) and steam reforming (a process in the refinement of natural gas). 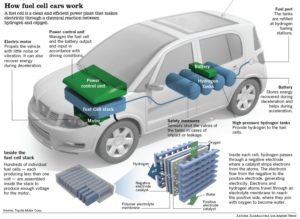 The fuel cell was first invented early in the 19thCentury, but it wasn’t until NASA was looking for an energy device for manned space flight in the 1960s that the concept gained traction. In simple terms, a fuel cell is an electrochemical energy conversion device that converts the chemicals hydrogen and oxygen into water, and in the process creates electricity. From there, the produced electricity is used to drive an electric motor, just like a typical electric vehicle.

So, what are the benefits of using hydrogen fuel cells for transportation? The most important is zero source emissions – the only thing emitted from the tail pipe is water. So it is perfect for cities and congested areas. Hydrogen also has very fast refuelling times – similar to that of gasoline or diesel – and is easily transportable in compressed or liquid forms allowing for a long vehicle range before refuelling. It also allows for a much smaller battery pack than a battery electric vehicle of similar range, meaning it weighs far less, and has greater efficiency.

However, hydrogen does have negatives.

For one, hydrogen is very light, and therefore has to be compressed to an extremely high pressure to be transportable. This compression process is a significant energy drain.

Fuel cells also lose stored energy in the process of converting it from hydrogen to electricity, usually about 20% — much higher than a typical battery loss.

Most hydrogen is produced by steam reforming natural gas, meaning that its production is heavily reliant on the fossil fuel industry and therefore contributes to carbon emissions. This leads many to argue that hydrogen isn’t actually ‘clean.’

And, lastly, hydrogen and fuel cells are expensive – significantly more so than electricity or gasoline – on a per-mile basis. There are four reasons for this:

Typically, most industry experts see hydrogen as offering lower benefits for vehicles in cities, where lower vehicle ranges and abundant infrastructure can easily support electric vehicles. For heavy duty applications, however, especially where EV chargers are uncommon, hydrogen is a much better choice. This makes hydrogen ideal for long-haul trucks, shipping, aviation, rail, and long-distances buses. 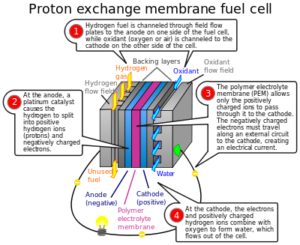 One of thekey promoters in heavy duty is Nikola trucks, a company that has partnered with Bosch and some other heavy hitters to develop the technology for long-haul rigs. The key advantage with hydrogen is that it allows a range of up to 1,600 km, and a refuel time of around 15 minutes – very close to their diesel equivalent. However, besides the above-mentioned hydrogen fuel cell problems, there is one more issue. They require some maintenance.

“Maintenance?” I hear you say. “That’s what we do!” Yes it is. Fuel cells require significantly lower maintenance than a diesel engine, but more than a pure battery electric vehicle. And that’s what makes it a good opportunity for the aftermarket.

Hydrogen’s future depends largely on how the technology shakes out with fleet operators. Will the range and refuelling advantages beat out the infrastructure concerns? Will it prove to be preferable to fast-improving battery technologies? Hydrogen’s success in these areas will determine whether you need to invest in the training and specialized equipment to service and maintain hydrogen fuel cells.

Fortunately, the aftermarket is in an enviable position. It has time on its side. The aftermarket typically doesn’t see vehicles in for service and repair until the warranty expires, usually at the three- or four-year mark. This means there’s time to observe and react, even if there are hydrogen fuel cell vehicles already in service.

My take on the future of hydrogen is mixed. Like most experts in new mobility, I believe that hydrogen’s true potential is in heavy duty, particularly in isolated areas. The transportable nature of hydrogen offers a long range between refills which can’t be matched by battery storage today. However, around town vehicles, both heavy and light duty, will go battery electric. The easy proximity to charging and the growing infrastructure means that they make much more sense, and recent new breakthroughs in battery technology may continue to squeeze hydrogen as a going concern, even for longer distances.

For the automotive aftermarket, the best plan is to watch carefully and wait to see how it all shakes out. I believe that hydrogen fuel cell maintenance will be a requirement and therefore a future business opportunity, but more in the role of a specialist, rather than a generalist operation or technician.

Time will tell, and that’s the one thing that the aftermarket can use to its advantage.