While product availability continues to be tops, price has become less important. Meanwhile, there are other growing factors behind why shops decide to call you 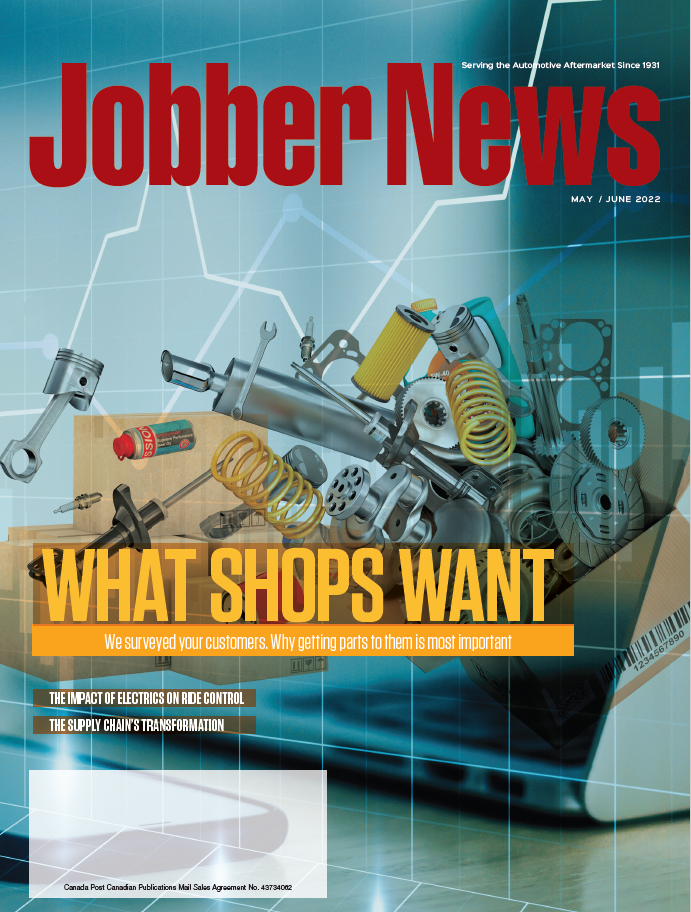 WHILE THEIR TOP CONCERNS remain essentially the same, there has been a shift in what automotive aftermarket service and repair shops want from their jobber.

Having the parts in stock they need topped the list once again when asking what were the important factors that decide which jobber is their first call — 94 per cent of respondents said so.

That number is consistent with the last Jobber News Annual Shop Survey we ran when 93 per cent said the same.

So, clearly, if you have parts in stock, you can expect regular business. That said, this has not been the easiest time to ensure stock is up to the needed level. The COVID-19 pandemic has made the supply chain tough to navigate.

“That surge demand is still at an all-time high; it’s increasing. And corporations still have the mindset of stocking their inventory as much as they possibly can so that they’re not in that condition they were in [back in] February, March, April, May of 2020,” he said. “So delay is really the biggest concern that we’ve seen”

We sent the survey out to readers of sister publication CARS through the newsletter and e-blasts. The last time we surveyed readers was in 2018. Due to a variety of reasons, the annual survey has not been completed in a few years. Jobber News is committed to ensuring we capture these insights every year moving forward so you can understand your shop customers’ needs and how they are changing.

Since the last survey, the importance of price seems to have dropped. In our 2018 survey, price was cited as important by 71 per cent of respondents. This year, it came in at 60 per cent.

However, when given the ability to comment, price commonly came up as an issue from respondents — and was often tied into availability.

“It is very important to be able to source quality parts at reasonable prices in a reasonable amount of time. A mutually respectful relationship is a key factor,” wrote one respondent.

“These days availability is a big factor but not at any price,” one wrote.

“Must have parts inventory at a reasonable price,” echoed another.

One can infer that as more shops move to order online, the relationships with staff, particularly counter staff, become less important.

In fact, there has been a big jump in how many shops have shifted online when ordering parts.

In 2018, about 38 per cent said they were ordering online four out of five times. In 2022, that number is at 49 per cent. Additionally, another 13 per cent said at between 70 and 79 per cent of their ordering was done online.

Add it up and nearly two-thirds of shops are putting online orders through to their jobber at least 70 per cent of the time.

“We were doing most of our ordering online before COVID hit,” wrote a respondent. “With a good system, it’s way faster. For us, the pickers and shippers are the most important personnel at our local jobbers.”

There is only one reason they need to be able to speak to someone. “The only time we talk to the counter is when there is a catalogue error or there is no stock at any local store that we can pull from. I keep telling them they have to look after the back store people.”

A few respondents noted they would work more with a jobber if they offered such capabilities.

“The main factor is a jobber that provides an online ordering platform,” one observed in the comments.

Another said they would order more online “if our jobbers would offer this service. If online is available, I will use it first because if I call, it most likely leads to being put on hold for a few minutes.”

One shop responded, however, noted a “love/hate” relationship when it comes to online ordering.

“Online ordering is handy because we can quickly do a part estimate and transfer it to our management software, and can quickly see a picture of a part along with specifications and warranty info,” they said. “It stinks because our service writers are doing the work of a counterperson (much like retail self-checkout) rather than having a parts professional serve us.”

They gave a recommendation to jobbers. “Our jobber needs to give us more stocking information on the online ordering platform, as we often have to call for availability anyways after looking the part up online, and many of the counterpersons are undertrained or apathetic (others are almost god-like).”

A jobber that has seen a shop customer leave can probably point to the service offered. It was a common reason raised among respondents when asked to share thoughts on why they moved on to another store.

Another issue raised was around the availability of products.

“Availability of parts began to be the main issue. This was pre-COVID. They constantly ran out of stock on popular items,” a respondent explained.

For some, it was accountability was an issue, as was an inability to keep promises.

“My old supplier changed to a corporate-run store, and it was downhill from there,” observed another respondent. “They would make a mistake and we would help them fix it, then it would happen again and again. Always an excuse — we are learning, head office this or that.”

And jobbers generally have a small pool of jobbers they call. About 87 per cent of shops call around to four or fewer jobbers — 46 per cent call upwards of four while 41 per cent stick to just one or two.

We asked automotive service and repair shops what they felt would have the biggest impact on their shops between advanced driver-assistance systems (ADAS), hybrid vehicles, electric vehicles or something else. More than a third (34 per cent) chose electric.

“Less services will be required by EVs. We are already positioning ourselves as the local experts with equipment and training,” one respondent said.

One noted that a quarter of vehicles seen in their shop are either electric or plug-in hybrid.

Hybrid vehicles (21 per cent) and ADAS (20 per cent) were fairly equal in terms of anticipated disruption. And people have their concerns.

“I believe that ADAS is what will mostly affect the ability to provide a significant enough amount of services, repair and simple part replacement in the future,” predicted a respondent.

A feeling among some who were surveyed was that many vehicles with these advanced technologies are starting to be seen more often in aftermarket circles.

“These systems are now starting to fail. Information and parts to repair are still slim out there,” according to one person.

“All vehicles equipped with these features are now becoming out of warranty, and of course, all of these are failing on modern vehicles,” observed a respondent.

“ADAS has been implemented on new vehicles for many years now. We expect to see more failures as these systems age,” said another.

“The four-year-old vehicles we see off warranty are all coming with some level of this technology,” reported a respondent.

The rest of the responses were either “none” or identifying the supply chain as their biggest challenge.

And how are jobbers helping with this? While many responded they were happy with the support they received — and some were on the fence — there were those who were not happy.

“My experience is that most jobbers I have been involved with on a regular basis have very little knowledge or concern,” one person wrote in the comments.

“Our jobber is behind the times. Their attitude is antiquated, they are not about how they can really help their customers,” said another.

So what do they want from their jobber?

One asked for more reps to showcase new technology.

“There could be more help available to help us be prepared from the industry as a whole. Good relevant support,” said another. 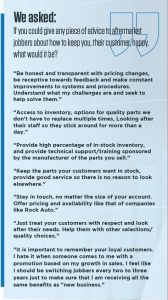 Finally, we asked what advice they would give to you, their jobber, as they deal with an influx of technological change in their business. There was a consistent theme through many responses: Keep up with the times.

“I have been pleading with jobbers for years to prepare for newer technology,” one respondent commented. “In my opinion, one of the most threatening technological developments is telematics. Telematics will reshape the industry as far as I am concerned and the dealers will gain a significant advantage over independents if something is not done quickly.”

Another noted that change is always happening. “Start studying now for the problems coming,” they recommended.

“It is not something that comes with a flick of a switch, but we can see that we must adapt with it and be prepared for it,” said another. “Now is the time to do so.”

For some, they wanted to ensure jobbers were doing their part to ensure technicians get the proper training and the industry ensures it continues to have access to repair information through right to repair.

“Future techs will require proper tools and training. Before COVID, I would attend as many instructor-led classes as possible. Of course, that is not available. So I feel that we are falling behind, quickly in this ever-changing aspect of our business,” wrote one respondent.

“We expect electric to have the biggest effect on the future of our business in the long run. Without expanded right to repair many aftermarket repair shops may go out of business,” said another.

“Transportation technology hasn’t fundamentally changed since the car replaced the horse, only the methods of performing the various functions of the car,” said one person. “We will always be able to profit from servicing cars to perform their fundamental function, we’ll just need the correct tools and information to do so.”

“I am concerned [about] how it will all play out, but I can also see opportunity in it all,” noted a respondent. “There will still be a need for these future vehicles to be serviced at some level. The question is: Will the repair/service information and equipment be available to the aftermarket?”

As one respondent observed, the timing is ideal for the industry when it comes to profitability and taking the time to think about the future.

“It’s a matter of how much and quick we can keep up/invest to meet the rising demand of the vehicle technology. On the other hand, as of now, people are spending money on what they have and not stepping out to buy new because of cost — [it’s] easier to spend a few thousand on what they have and budget for that versus budgeting for larger payments. For now, it’s beneficial to stay the course and keep an eye on what needs to be done in the next two to five years.”

This article originally appeared in the May/June issue of Jobber News.