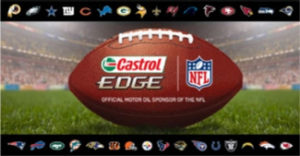 Castrol and the National Football League will stay together for a little while longer. The company announced this week that it will remain as a sponsor of the league as its official motor oil.

“Castrol is excited to continue our multi-year partnership with the NFL that started in 2010,” said Ame Cameron, Head of US Brands and Communications for Castrol. “Castrol is committed to delivering superior automotive lubricants and innovative marketing programs to the millions of NFL fans.”

“We are proud of our long-standing partnership with Castrol, and we are pleased to extend that relationship for seasons to come,” said Renie Anderson, NFL Senior Vice President of Sponsorship and Partnership Management. “We look forward to continuing to work with Castrol to create unique activations and experiences that resonate with football fans.”

Castrol has worked with the NFL on initiatives such as the “Words of Strength” video series that features Houston Texans’ defensive tackle Vince Willforks.

The multi-year deal will include Castrol using the NFL shield on select product packing in the coming months, the company said.