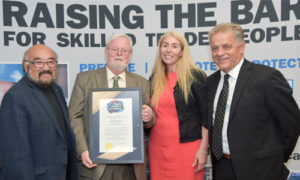 In 2017, John Norris (second from left) was awarded the Ontario College of Trades Chairman’s Award of Excellence for his outstanding contribution to skilled trades and apprenticeship in Ontario. He is seen here with then-CEO of the now-defunct College of Trades David Tsubouchi (far left), Kate Poultney, and Pat Blackwood.

John Norris, chairman of the Canadian Automotive Service Information Standard (CASIS) and an active board member of the National Automotive Trade Association (NATA), passed away suddenly on May 28, 2019.

He will be remembered at a visitation on Thursday, June 6, 2019 at Cresmount Funeral Home, 322 Fennell Avenue East, Hamilton, Ont. from 2 to 5 p.m.  A private family funeral and cremation will follow.

Memorial contributions to Diabetes Canada and Hamilton Conservation Foundation would be appreciated by the family.  Online condolences to the Norris family may be made HERE.

A long-time advocate for the auto collision industry in Canada, he was extremely active in ongoing efforts to ensure that aftermarket technicians are not locked out of vehicle service information.

Norris had been attending the Automotive Technology Summit at the annual national Skills Canada competition, held this week in Halifax. He suffered a heart attack while on the plane coming home to Hamilton, Ont. Diagnosed with heart arrhythmias years ago, he’d been fitted with an implantable cardioverter-defibrillator (ICD).

He is survived by his wife Annette and his children, Jeff, Teresa, and Richard. Funeral details have not yet been finalized.

Norris was especially well-known in Ontario where he was the executive director of Collision Industry Information Assistance (CIIA), and the Hamilton District Autobody Repair Association (HARA).

The non-profit organizations he founded provided member collision shops with tools to navigate regulations, bureaucracy, and industry challenges. He frequently commented on issues facing the automotive industry, particularly as it concerned apprenticeship and skilled labour.

He was also involved with the now defunct Ontario College of Trades (OCOT).

In 2017, he was awarded the Ontario College of Trades Chairman’s Award of Excellence for his outstanding contribution to skilled trades and apprenticeship in Ontario. The college awarded him for his commitment to organizing journeyman preparation courses and free pre-apprenticeship orientations throughout the province.

With regard to CASIS, he was a staunch defender of the voluntary agreement between automakers and the independent aftermarket, believing the standard meets technician present needs and could be adapted to meet future needs.

NATA secretary Rene Young described Norris as someone who worked hard for the automotive aftermarket.

“He was always professional in his dealings with people, and did everything he could to make sure the industry operated under the highest standards,” Young said.