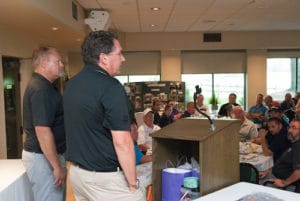 Aftermarket golfers raised $21,000 for the Charitable Foundation of Carquest and Worldpac (Canada) on Tuesday (Aug. 28).

The annual event, hosted by Carquest Canada and Worldpac Canada staff at the Springfield Golf and Country Club in Guelph, Ont., drew 150 golfers.

“We raised $21,000 here today,” he said, “and we’re really proud that all of that money goes back into the community, so thank you all.”

Proceeds from the tournament go to a wide variety of charities, most notably the Toronto Children’s Breakfast Club.

This year, golfers heard about another charitable endeavour, the Crane Lake Discover Camp in MacTier, Ont.

Trevor Martin, a members of the camp’s board of directors, told how the wilderness therapeutic program benefits troubled boys aged 10-15. 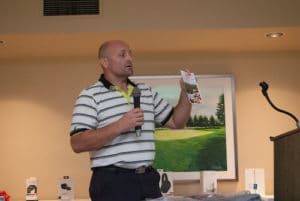 “Our goal is to help raise boys into young men who are contributing members of society,” he said. “We want to help the reintegrate back into society in a positive way.”

The camp was started in 2004 on 2000 acres bordering on the Massasauga National Forest, on the west tip of Crane Lake where it spills into the Blackstone River. Although it only runs summer programs right now, the camp would like to expand within five years to a year-round program.

Money donated by Carquest and Worldpak will help with infrastructure upgrades to make that possible.

The golf day featured giveaways, a silent auction, and a chance to “beat the boss” (Steve Gushie, president of Carquest Canada) on the first tee.

“Someone asked me what the course was like,” Gushie quipped when addressing the golfers at dinner, “and I had to say, ‘I have no idea. In 12 years, I’ve only ever been out on the first tee!’”

He said the company truly appreciates the support it has received from the automotive aftermarket.

“The money we raise here helps grow and strengthen our communities,” he said. “So this means an awful lot to us.”