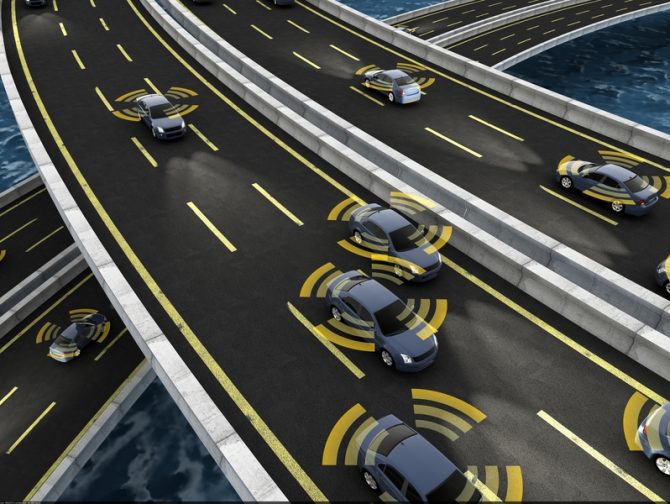 J2534 is the standard that is used for reprogramming vehicles and its slow-moving path to being part of a repair shop’s business is one that advanced driver-assistance systems (ADAS) seem to be following.

When J2534 came to be, the work was typically sent out by most shops. Today, 90 per cent of mechanical repair shops send ADAS work to a dealer. In collision repair, just 30 per cent of shops are capable of ADAS component replacement.

Those numbers for ADAS are similar to J2534 when it first came out, according to Jim Fish, partner at Innovatrium, which prepared the report ADAS Aftermarket Ecosystem 2030: The Coming Wave of Aftermarket Opportunity.

It was presented at the Automotive Aftermarket Suppliers Association Vision Conference in Detroit in the spring. 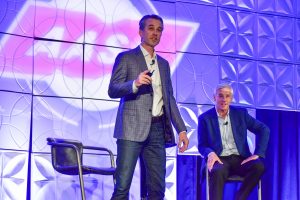 Jim Fish of Innovatrium speaks at the AASA Vision Conference 2022. Behind him is Matt Ballard of Blue Mind.

Today, 80 per cent of big shops — which Fish defines as having six or more bays — are doing reprogramming now on J2534, according to Fish. “There wasn’t a collision shop anywhere that was doing reprogramming. Now they are. In mechanical shops, now they are. So working together as an industry, we’ve captured the opportunity. We’re not sending it back to the dealer.”

ADAS needs to be tackled in the same way, he argued. “We have a long way to go. But we’re not going to get there unless we do something about it. No one company is going to solve this. It’s just not going to move the needle. We really need all of us together.”

With so much work that requires ADAS services going to dealers, that much work originally coming into a shop isn’t actually being done by the shop, he pointed out.

And why? Shops that were surveyed said ADAS is too hard, there isn’t enough demand or it’s too expensive.

Yes, it is hard, Fish acknowledged. “Like, just like J2534: When you’re doing reprogramming, if you screw up in the middle of it, it bricks the car bricks; bricks your electronic module. But these have been overcome with standardization,” he said, which is key for ADAS in the aftermarket.

And while demand may not be there for some, it’ll come as more vehicles hit the aftermarket with more ADAS technologies.

And it is indeed expensive, Fish said. “A full calibration and the collision shop for a high-end European car could cost in excess of $5,000,” he said. “So this is very expensive to perform. The billing is very expensive for it as well. So these are the problems that are inhibiting the uptake. It isn’t just demand. It’s hard. It’s complex, and it’s very expensive.”

But over time, with the right investments and standards in place, Fish said ADAS can and should be in most shops so that money that could be in the aftermarket isn’t going to dealers.