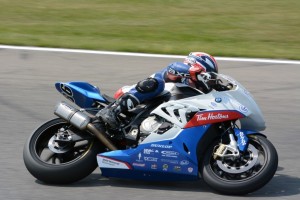 The 23-year-old heads into the doubleheader with a solid 77-point lead in the Brooklin Cycle Racing Pro Rookie of the Year standings. Riding the Tim Horton’s / Scot-Build Developments / BMW Motorrad BMW S1000RR, Young has accumulated 186 points through the first five races of the seven-race Mopar CSBK season. Samuel Trepanier of St-Isidore de Laprairie, Que. is second in the rankings with 109 points while Oshawa, Ont.’s Derrick Whyte is a close third with 99 points.

The BCR Rookie of the Year Award is open to racers in their first year of competition in the Mopar Pro Superbike class. They cannot have competed in more than four Pro Superbike races the previous season.

Young is making his debut in the Canadian Pro Superbike class after sporadic forays in the Liqui Moly Pro Sport Bike division in recent years. After placing fourth in the Mopar CSBK season opener at Shannonville Motorsport Park in May, Young has finished third in the four races since, and also led briefly in the third race at Autodrome St-Eustache,

Points are awarded to the top 20 finishers in the Pro Superbike class, with 50 points for a win, 42 for placing second, 37 for finishing third, 32 for fourth, 29 for fifth, and continuing by twos down to 20th. Points are also given to the top four race qualifiers on a 4-3-2-1 basis, and there is a two-point bonus for leading the most laps in a race.

Young has qualified on the front row at each Mopar CSBK round, with a season-high second in the most recent event at Atlantic Motorsport Park.

Trepanier has a top finish of seventh at Atlantic Motorsport Park aboard the Blysk Racing / Elle Skin BMW S1000RR, where he also qualified a highly competitive fifth. Whyte’s best finish was an eighth at the Shannonville season opener on his Snow City / Canadian Kawasaki / Lucas Oil Kawasaki ZX-10R Ninja.

A year ago at CTMP, Whyte snatched the Magneti Marelli Amateur Superbike title from Trepanier with a sweep of the doubleheader.

Last year’s BCR Pro Rookie of the Year Award was shared between Peterborough, Ont.’s Tomas Casas and Stacey Nesbitt of St-Lazare, Que. Casas is a victory contender in the Liqui Moly Pro Sport Bike class on his Peterborough Cycle Salvage / Parts Canada Yamaha YZF-R6, while Nesbitt is coming off a season-high fourth place finish in the most recent Pro Sport Bike race at AMP on her Motovan / Statoni Racing Honda CBR600RR.

A major player in the Canadian Powersport industry for more than three decades, Brooklin Cycle Racing is based in Pickering, Ont. Currently, BCR offers custom machine shop and fabrication facilities, as well as full Dynojet Dyno tuning services both at its shop and via the Official Mopar CSBK Series support Trailer. The CSBK Series Air Fence is transported and installed by BCR, while the current fleet of identical spec Kawasaki Ninja 300 racers were built at the BCR facilities last summer.