What is Ontario’s worst (and best) city for driving? 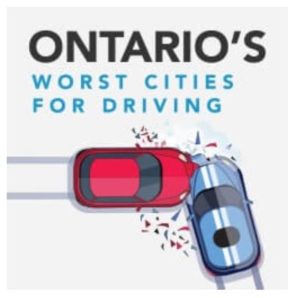 What is Ontario’s worst and best city for avoiding tickets and collisions? You would be surprised.

Orangeville, Bradford and Woodstock, Sault Ste Marie, and Brantford ranked the top five worst cities for tickets and accidents, while North York, Toronto and East York, Etobicoke, and Mississauga were ranked top five best cities to avoid those driving pitfalls, according to InsuranceHotline.com.

InsuranceHotline.com used the data received from shoppers looking for insurance quotes on their collision and ticket history, and to be included in the study a minimum of 1,000 quotes for each community were required.

The Ontario average of drivers involved in an at-fault collision in the last 10 years was 8.9%, but in Woodstock it was 13.6%.

The Ontario average of drivers that had received a ticket in the last three years was 6.9%, but in Caledon it was 15%.

The Ontario average of drivers that had a ticket and a collision on their record was 3.5%, but for Orangeville it was 9.4%.

The study was meant to remind drivers that their driving record is a significant factor in determining insurance premiums.