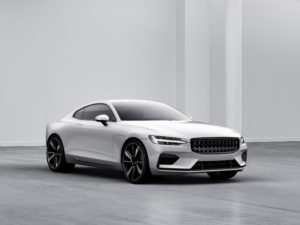 Volvo Cars’ performance electric car brand, Polestar, unveiled a four-seat coupe in lightweight carbon fiber as its first model, adding to competition in a market dominated until now by Tesla.

The hybrid Polestar 1 promises a range of 150 kilometres (95 miles) on a charge, with a gasoline-powered engine to supplement that if needed. It is due to be produced at a factory in western China and released in 2019.

Volvo, owned since 2010 by Chinese automaker Geely Holding, announced in July that it would make only electric and hybrid vehicles starting in 2019.

“There will be a clear difference between the two brands that add to each other in a very good way,” Ingenlath, a former Volvo senior vice-president for design, said in a phone interview ahead of the model debut in Shanghai.

All manufacturers are moving toward more hybrids, but industry analysts say a transition to full-electric vehicles is years away.

Volvo has announced plans to release three all-electric models under its own brand by 2021.

The next Polestar model, the mid-size Polestar 2, is intended to compete with Tesla’s Model 3, the company says. Ingenlath declined to give a price, but the Tesla starts at $35,000.

Polestar will use an internet-based sales system with a monthly subscription fee, Ingenlath said. The company says that service will include the ability to rent other Volvo and Polestar models.

Sales of fully electric and hybrid vehicles have risen but last year’s total was only 2.6 million, or about 3 per cent of the global market. Navigant, a research firm, forecasts that will rise to about 3.7 million in 2018 and to more than 9 million by 2025, or about 9 per cent of sales.

Polestar expects China, where the government is promoting electric car development, to account for about one-third of global sales, according to Ingenlath.

China is the world’s biggest market for electrics and hybrids. It accounted for 40 per cent of last year’s global demand with sales of 336,000 units — more than double U.S. sales of 159,620.