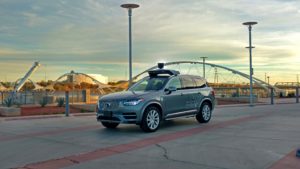 Uber Technologies Inc. is building a roadmap to become more than a ride-hailing app and it’s chief executive is indicating Toronto will figure into that transition.

Dara Khosrowshahi hinted at global plans for bus and train services, the expansion of its Jump bike and e-scooter rentals, more partnerships with public transit providers and autonomous vehicle efforts in an interview with The Canadian Press, where he stressed how important the city is to the company’s growth.

“We need to move beyond the car as being the main urban transportation mechanism. I believe a revolution is coming,” he said. “We really want Uber to be the one-stop shop for mobility in any city.”

He made the remarks while he was in Toronto for the first time in his role with Uber to announce a new engineering hub – the company’s eighth outside of the U.S. – and a $200-million expansion of its self-driving vehicle centre in the city. Both are expected to help the San Francisco-based tech giant build and update its infrastructure so it can continue to scale and offer more features and products to riders, drivers and cities.

In March, Uber acquired Jump Bikes, an electric, dock-less bike-sharing service it piloted in San Francisco, and in July it teamed up with Lime to bring electric scooters to its app in some markets.

“I hope that they show up here,” Khosrowshahi said. “It’s something that belongs in every city out there.”

The mobility revolution he said he is sensing will centre around single-occupancy electric bikes and scooters, which he called “magical.”

“We need to move beyond the car as being the main urban transportation mechanism. I believe a revolution is coming.”

He is even eyeing some more serious modes of transportation.

“We want Uber to make bus service available or train service as well,” he said.

But before any of those lofty plans can happen, he admitted, “there’s a huge amount of work to be done.”

Uber introduced a partnership in 2017 with the town of Innisfil, Ont., north of Toronto, that offers flat-fare rides between select destinations as an alternative to building a traditional public transit system. Innisfil has estimated it will save the town more than $8 million a year, when compared with running a traditional bus service.

However, the company is still facing opposition to its service and struggles with regulation in numerous big cities around the globe, including Vancouver.

There’s also the threat of Lyft, a ride-hailing competitor that has been making an aggressive push into several of Uber’s key markets including Canada.

That’s partly why the company is working towards autonomous rides, but its program has faced criticism since March, when it paused testing of its autonomous cars in Toronto, San Francisco, Phoenix and Pittsburgh after a woman was struck and killed by one of the company’s self-driving vehicles in Tempe, Ariz.

The company decided to shut down the Arizona centre responsible for the fatal test in May.

Around the same time, Uber said it was “doubling down” on its Toronto efforts. Prior to the fatality, it had been testing self-driving vehicles in the city, but the cars were not picking up passengers.

Khosrowshahi and Raquel Urtasun, who is leading Uber’s self-driving car efforts in Canada, said the company still doesn’t have a timeline for how soon autonomous Uber cars will be hitting the streets and be able to be hailed by consumers.

For now, they said they’re focused on the expansion of the Advanced Technologies Group Research & Development Centre in Toronto, which has focused on self-driving vehicles since it opened in May 2017, and the engineering hub it will open in early 2019.

By the time both are completed, Khosrowshahi said the company will have 500 employees in the city, up from about 200 it employs there now.

“We like what we see. Toronto has a terrific talent base,” he said. “Canada, for us, is an important hub … we think we can build a terrific engineering talent base here.”