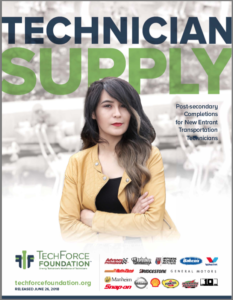 The post-secondary supply of aspiring vehicle technicians in the U.S. is simply not keeping up with industry demands, according to a new report from TechForce Foundation.

The non-profit organization focused on developing new technicians has released a “Transportation Technician Supply Report,” which reveals the true nature of the skills shortage in the U.S.

It says data from the National Center for Education Statistics shows that an ongoing skills shortage first became truly severe in 2013. The gap between supply and demand has only increased since then.

“With only a small percentage of students interested in going into a skilled trade versus seeking a college degree, the competition among all the skilled trades for those students is fierce,” said Greg Settle, co-author of the report and TechForce’s director of national initiatives. “If you look at auto technicians, they can make a very solid, middle-class income. However, starting wages for auto technicians are among the lowest across the skilled trades, and that is often what young and men and women will focus on when making a career decision.”

The report reveals that the supply of post-secondary auto graduates decreased by 1,829 completions between 2012 and 2016. There were an estimated 38,829 auto tech graduates for 2016. The U.S. Bureau of Labor Statistics (BLS) estimated demand for new entrants at 75,900.

The supply of collision technicians has also steadily declined over the past six years. Supply of new techs in 2016 was pegged at 5,791, against a demand of more than 17,000.

Only in diesel programs has the total number of post-secondary completions increased over the same period. It was still not enough to meet demand, however. The projected BLS new entrant demand for diesel technicians is 28,300 annually, against a supply of 11,966 in 2016.

“Our country and education system have divested in high school auto shops and stigmatized trade school education ,which is killing the trades,” she said. “A big part of the problem is the outdated image of the ‘grease monkey’ mechanic that students and their parents, teachers and counselors may have.”

She said that without some form of focused, collective action, the transportation industry will continue to suffer from inadequately financed, fragmented efforts to solve these problems.

“A solution requires pooling resources and consistent public messaging to change perceptions and build a talent pipeline,” she said. “TechForce Foundation is dedicated to providing the collective source of action to solve the root causes of the problem.”