Tire Dealers Association of Canada wants to know if sensors are required year-round on cars that have TPMS systems. 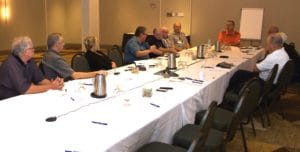 Members of the board of directors of the Tire Dealer Association of Canada (TDAC) met in Toronto during the association’s national trade show and conference.

Tire dealers across Canada want government to finally settle the question of whether sensors for tire-pressure monitoring system (TPMS) are required in winter tires.

They say a significant number of consumers whose vehicles are equipped with TPMS systems routinely refuse the added cost of having sensors installed in their winter tires. That leaves tire shops in an awkward position because it’s unclear whether they’re legally allowed to hobble a TPMS system during winter months.

“Legislation from the federal government says if a vehicle comes in the shop with working TPMS, it must leave with working TPMS. But that does not include winter wheels and winter changeovers,” says Ray Galeta, a member of Tire Dealers Association of Canada (TDAC) board of directors. “That’s where the issue lies.”

Meeting in Toronto last week for its national trade show and conference, TDAC board members agreed it’s time to get the matter resolved once and for all.

They’ve referred the issue to a working committee that will poll regional tire associations and tire shops, develop an industry policy, and then take it to the federal and provincial governments.

“Part of the challenge here is knowing who to talk to on this,” said TDAC executive director Bob Bignell. “In the past, Transport Canada has passed the buck to the provinces, and provincial authorities have sidestepped the question entirely. But we need some clarity here.”

Galeta, who is also the executive director of the Western Canada Tire Dealers Association, said the major tire chains in the west have taken a stance against letting cars leave without working TPMS.

“All the larger organizations are saying that if the vehicle comes in with working TPMS, it has to leave with working TPMS,” he said. “That’s their position and they stick to it fairly stringently. They’ll turn customers away if they have to.”

Frank Connor, a TDAC board member and the president of the Atlantic Tire Dealers Association said governments shouldn’t leave the decision to consumers or to tire shops.

“If the federal government had just considered this matter when it originally passed the legislation (on TPMS use in Canada), we wouldn’t be having this discussion,” he said.

The big concern, of course, is liability. Talk has swirled around the industry for years about tire shops that have been sued by consumers who refused the installation of TPMS in their winter tires but whose vehicles were subsequently damaged in accidents.

At least one such case, in which an automotive service provider was sued for $6.5 million, was settled out of court for an undisclosed amount.

“We just don’t know the legalities of the situation,” said Bignell. “Writing a customer’s refusal on the invoice is not really protection for tire shops. So we need real clarity on the issue.”

Galeta suggested TDAC work with other groups, such as the Canadian Federation of Independent Businesses or the Automotive Industries Association of Canada.

“We need to figure out the right avenue to take, develop a strong case, and get some resolution as soon as possible,” he said.

TDAC president Richard Bender agreed, saying, “This is the number one point of confusion we’re having right now, because there’s no law to guide us on this. It would be so much easier if the federal government said if the car comes into your shop with working TPMS, it must leave with working TPMS – winter and summer. End of story. That’s one sentence, and it would be all we need.”