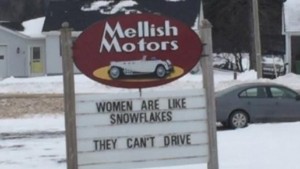 A P.E.I. used car salesman’s sense of humor has gotten him in trouble on social media.

Mellish Motors, in New Annan, P.E.I, offered what it thought was a ‘cute’ witticism on its store-front sign: “Women are like snowflakes… they can’t drive.”

And now, others in the automotive aftermarket are weighing in. 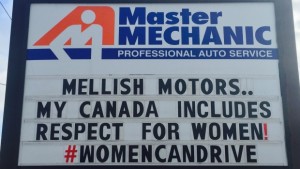 Josie Candito, owner of a Master Mechanic shop on Howard Park Avenue in Toronto, has posted a reply on her storefront sign: “Mellish Motors… My Canada includes respect for women!” It also offers the hashtag #WomenCanDrive to further the conversation.

Other offers of support are coming in on social media from shop owners and technicians.

Mellish Motors manager John Mellish, who started the controversy with his roadside comment says he never meant to offend anyone, telling a reporter, “I do respect women 100 per cent.” 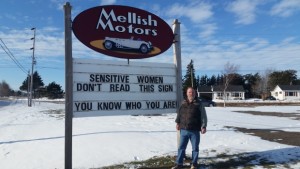 But follow-up signs in front of his facility only seemed to stoke the fires of controversy, suggesting: “Sensitive Women Don’t Read This Sign. You Know Who You Are!” and then “Attention Drama Queens, Auditions for Today Have Been Cancelled!”

He even posted a joke meant to give equal humorous treatment to men: “Used Cars Are Like Husbands: Great Looking, But All Have Issues.”

Replies from readers of online news stories, as well as Facebook and Twitter users, run the gamut from support to condemnation.

Candito said she posted the message in front of her shop to remind Mellish Motors that, “It’s 2016 and women are respected. We deserve more than to be treated like that.”

She says Mellish’s billboard goes against everything she’s trying to accomplish as the female owner of an auto business: respecting women as consumers, and empowering them to make decisions about their vehicles.

“A lot of women will feel when they go in that the guy is going to take advantage,” she told the CBC.

The story has been reported by news outlets around the world, including Buzzfeed, Mic magazine, the Toronto Star, the Daily Mail in the U.K. and the Huffington Post.

Mellish said he is known for provocative signs, and said he’ll continue to put up signs that push people’s buttons.