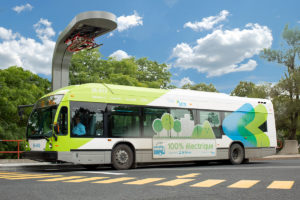 A new report by a green energy think-tank calls for increased investment in electric buses to both reduce emissions and boost Canada’s growing manufacturing base of the vehicles.

The report by Clean Energy Canada says that while Canada is a leading manufacturer of electric buses, transit authorities are behind international peers.

“Canada’s cautious on some of these things,” said Merran Smith, executive director the think tank based out of Simon Fraser University.

“Electric vehicles are beginning to really take off, but people aren’t really talking so much about electric buses and there’s huge potential with them.”

China is by far the leader in electric buses with about 99 per cent the world’s e-buses, including Shenzhen’s more than 16,000-strong fleet. Other cities have also committed to moving in that direction, including Amsterdam which is aiming to transition to zero-emissions buses by 2025 and Los Angeles by 2030.

Several Canadian cities have also set fully-renewable fleet targets, but on less aggressive timelines. Montreal is aiming for 2040, Toronto by 2042 and Vancouver by 2050, the report notes.

The report’s call for more buses comes the same week as a study by Bloomberg New Energy Finance Ltd. found the world’s electric buses will displace about 270,000 barrels a day of diesel by the end of this year as the heavily used vehicles have an outsized impact on fuel demand.

The report also estimates that by 2030, electric buses will have about the same upfront cost as diesel. Currently, e-buses cost about two to four times more.

But the costs are far less if the full life of the bus is considered. Translink estimates lifecycle costs, which factor in fuel and maintenance, will be about the same by 2023, while if health costs of diesel are considered the price is close to equal now, said Smith.

Edmonton, which has run a pilot program for electric vehicles but has no target for going fully renewable, found that maintenance costs were more than 40 per cent cheaper compared with diesel buses.

“We have four great Canadian companies producing electric buses, you know in Manitoba, Quebec, British Columbia, so really there’s an opportunity to support these made in Canada products.”