In the ongoing ‘Right to Repair’ battle, AARO says it will hitch its wagon to American-based NASTF. 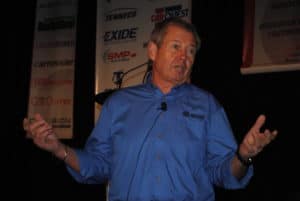 Frustrated by nearly 10 years of inaction on the right-to-repair front in Canada, the Automotive Aftermarket Retailers of Ontario (AARO) is turning to the U.S. for help.

“CASIS simply isn’t working for independent repair shops and there’s no movement to fix it, so we’re going to work with NASTF,” she told CARS magazine.

NASTF has agreed to receive Service Information Requests (SIRs) from Canadians who run into technical difficulties flashing or reprogramming vehicles. It will also go to bat for Canadians when OE websites have missing information or when special OE tools and training are not made available to the aftermarket.

“We need to lead the way on this,” said Freeman.

She said that while neither the CASIS nor the NASTF voluntary agreements originally covered security protocols or telematics, NASTF has started to address those issues in the U.S., and is proactively working to ensure that new communication protocols don’t threaten aftermarket repairs.

In Canada, Freeman said, there has been no such developments because the board that administers it has shown no appetite to expand the agreement, resolve access issues, or promote the program effectively.

Cochrane, who assumed the NATA presidency early this year, has been particularly vocal about the need for the Canadian aftermarket to be more forceful in its dealings with carmakers. But seven months into the job he said he feels blocked by the CASIS board.

“I’ve said for nine years that we had to have meetings at least twice a year to bring up issues, hold discussions, and generally promote CASIS,” he said. “Yes, we have an agreement, but there are ongoing issues that need to be resolved, and the CASIS board is not aggressive enough to get the information we need.”

He said NASTF is much more willing to press issues with carmakers, giving examples of Toyota Honda key codes that are available to independents in the U.S. but not in Canada, and a Kia reflash issue that was resolved because of NASTF involvement.

“When an issue is brought forward, it will get dealt with. It will not be swept under a rug,” he said. “Canadians can already use the NASTF site, but we’re going to make it official. And we’re going to promote it. We’re going to have regular meetings with the independent repair community to discuss issues and improve access.”

AARO will also become an administrator of the Vehicle Security Provider (VSP) program in Canada, with technical support provided by Auto Aide of Barrie, Ont. VSP fees will be used to promote the right to repair program. Ontario shops that are on the leading edge of automotive reprogramming will also be available to AARO members when they face issues.

“Canadian shops are getting good at finding work-arounds. But they shouldn’t have to use work arounds. They should have access through legitimize sources. They’re not doing anything wrong,” said Cochrane. “We’re going to do what we have to do to fix cars in a legitimate way.