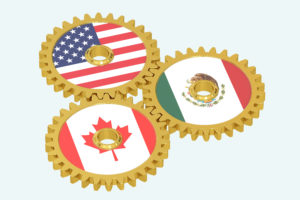 A Scotiabank Economics report used the auto industry as an example of how deep ties run between the three NAFTA countries.

The North American Free Trade Agreement has been quite the boon for all three countries involved, according to a Scotiabank Economics report.

“North American trade has more than tripled under the pact,” said Jean-François Perrault, Senior Vice President and Chief Economist at Scotiabank. Furthermore, “trade balances between the U.S. and its NAFTA partners have been relatively stable for over a decade.”

The report, The NAFTA Success Story, found that the vast majority of states are “significantly” touched by NAFTA. And among the top exports? Autos and parts.

As a case study, the report looked at the auto sector to show off how deeply integrated NAFTA is. “The North American auto sector is amongst the best examples of how intensive intra-NAFTA integration has allowed the continent’s manufacturers to maintain their global competitiveness,” Perrault said in the report, the first in a series that Scotiabank Economics is releasing in regards to the agreement.

The case study reports that vehicle components cross borders upwards of six times before being installed and delivered to customer, while auto parts can go back and forth up to eight times. Industry employment outpaces overall job growth, increasing by 5 per cent annually since 2010. The case study also reports that “75 per cent of the content of cars produced within North America is local. For context, only 62.5 per cent local content is required for finished vehicles to qualify for tariff-free movement between the NAFTA-3.”

The agreement is not responsible for manufacturing job cuts, the report found. Instead blame technology since “manufacturing’s share of US GDP has been stable for decades.”

There is an opportunity to make NAFTA a win for all three countries, Perrault noted. He suggested “updating NAFTA to cover the advent of e-commerce (which didn’t exist in 1994), expanding trade in services, and improved protection for intellectual property.”

And dependence on NAFTA is also widespread. “Millions of North Americans in every region now depend on NAFTA trade for their livelihood,” Perrault said in the report.

“While North American trade has grown quickly under NAFTA, the combined importance of Canada and Mexico in U.S. trade has remained remarkably steady since NAFTA’s inception at just shy of 30 per cent of total U.S. trade — twice as large as China’s nearly 15 per cent current share — and NAFTA trade has accounted for about 40 per cent of US export growth,” he added.

The report came as the agreement has been under fire by U.S. President Donald Trump, even before he took office in the White House. Trump has been advocating a protectionist stance, threatening to impose a 35 per cent tariff on goods imported from Mexico. He has blasted automakers for investing and operating plants in Mexico. In Mid-February, Japanese automotive parts maker Nisshinbo said it was backing off plans for a US$90 million plant in Mexico and indicated it would instead move to the U.S.

Canada’s Foreign Affairs Minister Chrystia Freeland said recently that any discussions to renegotiate NAFTA would include all three countries, brushing off any speculation that Mexico would be iced out of talks. That echoed comments made by former prime minister Brian Mulroney, an architect of NAFTA. Freeland also noted that it may be some time before negotiations take place as “the United States does not yet have a team in place that could even begin those negotiations, so let’s not put the cart before the horse.”