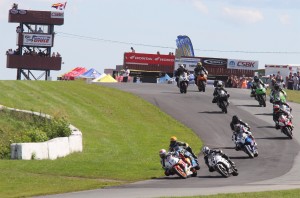 Atlantic Motorsport Park will host a doubleheader for the Mopar Canadian Superbike Championship in 2016.

The Mopar CSBK National Championship motorcycle road racing series will comprise six rounds over four weekend events in 2016. The series will start at Shannonville Motorsport Park’s Pro Track at the end of May, with the traditional season-ending doubleheader at Canadian Tire Motorsport Park in mid-August.

Series organizer Professional Motorsports Productions of Toronto has also indicated that it is possible an event may be added to the 2016 Mopar CSBK tour.

The opener at Shannonville marks a return to the venue that has hosted more Superbike National rounds than any other track, and staged the second ever such event in 1980. The series last raced at S.M.P. in 2014.

Autodrome St-Eustache, just north of Montreal, is home to the ASM, the Quebec-based track rider group that is organizing a new Regional Series in that province in 2016. Always big supporters of the National tour, fans look to the rebirth of provincial competition to further increase the number of Quebec-based riders on the CSBK tour.

The two rounds at A.M.P. in Nova Scotia in July (or “Shubie” as it is widely called) are backed by big local dealer Pro Cycle, and mark the first doubleheader at the challenging hillside track since 2010. Six years ago, Canada’s winningest-ever Superbike racer, Jordan Szoke of Brantford, Ont., won on both days to claim the first ever perfect season on the tour; Szoke repeated this amazing accomplishment for Express Lane / BMW Motorrad in 2015.

Championships in all four National categories, the Pro Superbike class as well as Pro Sport Bike, Amateur Sport Bike and Amateur Superbike, will be decided at the track formerly known as Mosport Park.  Further details of other support race and class activities will be announced shortly.

“We are actively looking for more Canadian venues to stage Mopar CSBK National rounds,” explained PMP’s Colin Fraser. “We continue to focus on the west to build our National structure, and want to thank the EMRA Club in Edmonton for their help over the past two years.”

The 2016 season will mark the third year of CSBK spec tire support from Dunlop, serviced at each venue by National distributor Pro 6 Cycle. The CSBK Series will again utilize Dynojet Research-provided tuning equipment available to all competitors, while spec fuels will come from Sunoco and Shell through Brooklin Cycle Racing.