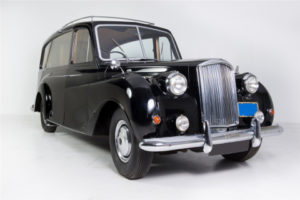 The World’s Greatest Collector Car Auctions, will showcase its eclectic Salon Collection, featuring rock legend John Lennon’s 1956 Austin Princess, during the 46th Annual Barrett-Jackson Scottsdale Auction, to be held Jan. 14-22, 2017, at WestWorld of Scottsdale in Arizona. The Barrett-Jackson Salon Collection is only available at the Scottsdale auction and showcases some of the world’s most rare, valuable, collectible and coveted vehicles.

“Our Salon Collection has always offered the best of the best,” said Craig Jackson, chairman and CEO of Barrett-Jackson. “While it continues to showcase some beautiful classics, this year it has grown to include some really priceless Americana and many other significant vehicles of our time with great provenance, like John Lennon’s personal Austin Princess.”

John Lennon’s 1956 Austin Princess (Lot #1380) includes the original, signed registration by the rock music legend. Purchased as an Austin hearse by Lennon in 1971, it was used extensively in the documentary “Imagine” before being customized with two rows of airline seats. The car was personally selected by Lennon because the doors opened to a wider angle, allowing for a quick escape from throngs of adoring fans.

Also a part of the prestigious Salon Collection is a 1930 Delage D8 Cabriolet (Lot #1379). Built by the renowned French coachbuilder Henri Chapron, this Delage is the only Chapron-bodied D8 C known to survive today. It was restored by LaVine Restorations in Nappannee, Indiana, and includes an extensive history covering its ownership and restoration, along with correspondence from Delage registrar and historian Peter Jacobs.

“Our Salon Collection offers an extremely high-caliber selection of diverse vehicles that represent all facets of the collector car universe,” said Steve Davis, president of Barrett-Jackson. “The quality of these cars is simply remarkable. Each one holds a prominent place in automotive history and offers a rare glimpse into our collector car community.”

The #006 competition Cheetah (Lot #1376) is the only one built and raced with the famous Corvette heavy-duty 427ci L88 aluminum-head racing engine option. It was ordered new in ’64 by Jack Goodman, owner of Clarence Dixon Cadillac Dealer in Hollywood, California, and is one of 15 known to survive today. Its museum-quality restoration by BTM LLC of Arizona includes the lowest-mile ’67 Corvette 427ci L88 IT-code crate engine. This Cheetah has five years of SCCA/FIA racing history and was the first Bill Thomas Cheetah to attend Goodwood Festival of Speed in 2016.

Other noteworthy Salon Collection vehicles include a ’33 Auburn 12 161A Salon Phaeton Convertible (Lot #1383). One of the rarest Auburns produced, the Murphy-inspired coachwork features long, sweeping lines, a tall grille and a characteristically short windshield. It carries original Lycoming V12, which was one of the most powerful engines offered in 1933 for a street car and set several speed records that stood for several years.

Lot #1382, a 1932 Rolls-Royce Springfield Phantom II Henley Roadster by Brewster and Company, has been recently restored from the ground up, including the distinctive wire wheels. The epitome of classic elegance, the car has new leather and carpeting inside and a freshly painted exterior in dark blue custom urethane paint. For more information about Barrett-Jackson, visit http://www.barrett-jackson.com