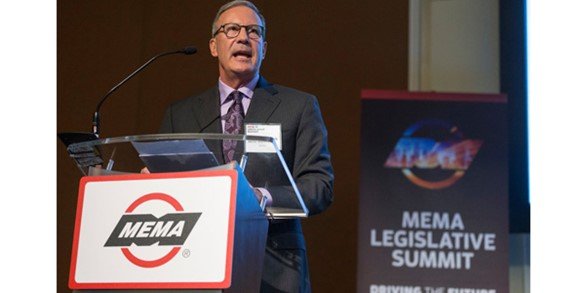 The supplier side of the automotive aftermarket is mourning the loss of Steve Handschuh, former president and chief executive officer of the Motor & Equipment Manufacturers Association (MEMA) died Aug. 22

He retired at the end of 2018 with the announcement citing health concerns and a desire to properly transition the organization’s leadership. He also served as president and CEO of the Automotive Aftermarket Suppliers Association (AASA), a division of MEMA, when he joined the organization in 2006 before taking over as head of the parent organization in 2013.

Upon his retirement, he was succeeded by Bill Long. Like Handschuh, Long was head of AASA and took over as MEMA’s leader.

Handschuh, a Baltimore native, spent more than 40 years in the automotive aftermarket. He started as an outside salesman for Mighty Auto Parts, eventually working his way up to vice president of sales and marketing. He also worked with NAPA Auto Parts/Genuine Parts Co. for 18 years, including serving as president of NAPA from 1998-2004. He was also commercial senior vice president at AutoZone.

In 2018, Handschuh received the organization’s top honour with the MEMA Triangle Award in 2018. It recognizes vision, passion and dedication to the interests of the automotive industry.

“MEMA and our industry have lost a great one. Steve was a dynamic leader, consummate professional, and friend to all who worked with and for him at MEMA, and he left a tremendous legacy from his leadership. He will be mourned by the entire MEMA family, both employees and membership,” Long said. “Steve was a man of integrity and always spoke highly of his wife Joann and children, making them his top priority. He was deeply involved in serving in his local Jehovah Witness Kingdom Hall and helping its young community. As a son of Charm City, Steve was a lifelong Orioles fan. Steve was also passionate about music and was undoubtably a superfan of The Beatles.”