Growing your business with LEAN

Shop owners who apply "lean" methods are finding that the key to productivity is eliminating waste.

Auto Service Kingston, a nine-bay shop in the west end of Kingston, Ont., may look like any other repair shop to some customers.

But those who work in large corporations where “lean” management principles are used may notice some of the hallmarks that are common in their own workplaces.

“People from large organizations who’ve been exposed to lean are absolutely floored that a little automotive shop has taken this on,” says owner Steve Bernard. “They go back and tell their co-workers, and then we have more customers.”

It’s fair to say that most visitors wouldn’t understand how all of those the visual aids enable the processes and shop culture that come with lean management, streamlining the work and contributing to a phenomenal improvement to Bernard’s bottom line. 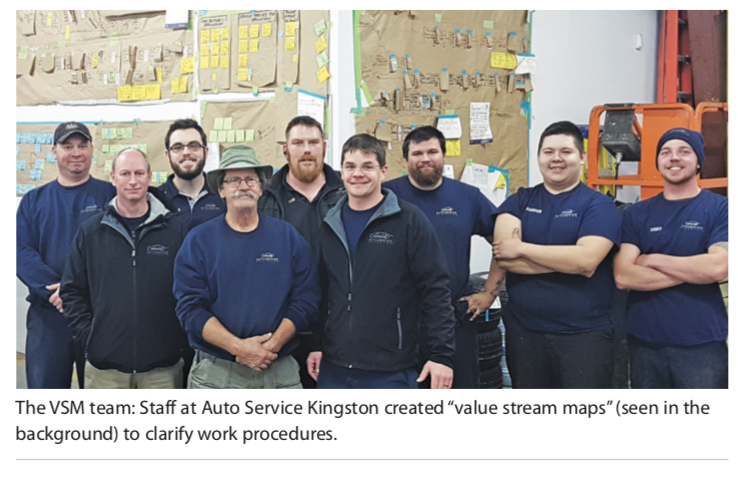 “Most independent shops run at a 50% billing rate,” says Bernard, “where they’re buying 8.8 hours from a mechanic, but only billing half of that. We were well below that when we started with lean, but now we’re around 90%.”

Customer satisfaction has been key. The business has tripled its revenues since Bernard acquired it six years ago. The growth was organic, all of it coming through word of mouth.

The lean approach, pioneered by Toyota over 60 years ago, is ideal for independent repair shops because of its emphasis on improving productivity using existing resources.

“When Toyota developed lean, the company was under severe financial constraint, so it was all about finding ways to do more with less, and to do it better, faster, and at lower cost,” says Larry Coté, president of Lean Advisors, who worked with Bernard to improve shop processes.

For Donny Seyfer, co-owner of Seyfer Automotive in Wheat Ridge, Col., lean is a no-brainer. “You don’t have to spend any money, and you can make more,” he says. “Where else can you get that?”

“Lean has helped us rethink things, and find better ways to use the resources that we have,” says Sean Payne, owner of Martin’s Bus Service in Napanee, Ont. “I think we all have excess capacity that’s just sitting there, and we need to learn to organize it a little differently.”

Through his recently acquired lean eye, Bernard now sees all kinds of opportunity for improvement when he visits other garages. “Immediately you start shifting equipment and stuff in your head,” he says. “Maybe it’s a way to get 33% more work with two days of rearranging. It’s wicked to have that ability to see these things.”

The economic driver behind lean is the identification and removal of waste. That is, eliminating extraneous activity or expenditures that don’t add value for the customer. Replacing an alternator, for example, adds value. Spending 20 minutes looking for a tool does not. 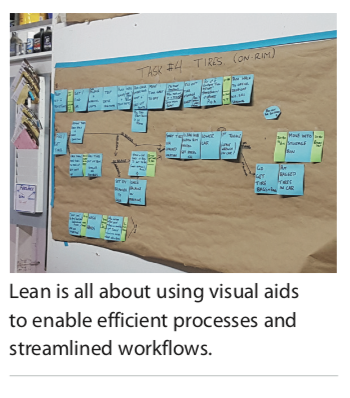 A pivotal method for Bernard has been “value stream mapping” which creates visual representations of end-to-end work processes, such as a seasonal tire change. It allows employees to identify waste, and sets the stage for designing and implementing improvements.

The best results are often achieved when the mapping sessions are led by the employees who work with the processes every day. This requires managers to rethink their role.

“It wasn’t easy for me to step back and let somebody else lead like that,” Bernard admits, “but when you see somebody take it over and knock it out of the park like my guys have, it’s one of the most rewarding things. It’s all about pride of ownership.”

“We’ve tried to let the people drive the process,” says Payne, “because they’re the ones it’s going to affect the most, in terms of their day-to-day work.”

One of the lean tools evident at Auto Repair Kingston is a “water spider.” In lean terminology, that’s a support person who uses “kitting carts” to bring parts, tools, and fluids directly to the technicians so they don’t have to leave their work areas.

“The water spider just keeps everything coming to them so they can do what they’ve been trained to do, and not get distracted,” says Coté. “Distractions not only waste time, but introduce the possibility of errors and safety problems.”

One of lean’s biggest challenges is sustaining the gains. Managers need to recognize that the lean journey never really ends. “It’s always a work in progress,” says Payne, “so we have keep our foot on the gas, because if we let off, we’re just going to go back to our old ways of doing things.”

Getting started with lean

Lean calls for a fundamentally different way of working, and like any major change, it doesn’t occur overnight. “Don’t over-extend yourself,” says Seyfer. “You’ll get nothing done if you take on too much.”

With that in mind, here are five tips from the experts for launching your lean program:

Get trained. Lean principles are not overly technical, and excellent courses are available online, through community colleges, or in public seminars.

Start with small steps. Efforts to “reinvent the wheel” usually fail. It’s much more effective to start with a few quick wins, and build momentum from there.

Get employees on side. Lean calls for major change in the workplace. It cannot be achieved without employee buy-in. It’s up to management to prove that lean makes the work easier and less frustrating, as well as adds more value for customers.

Avoid the “too busy” trap. If you’re always too busy, chances are you’re wasting too much time on inefficient processes. Some quick wins will help break the vicious circle and create some time so you can implement even more improvements.

Get a coach. Working with an experienced lean coach or facilitator brings in an outsider perspective, and helps accelerate the adoption of the lean mindset.

Lean has transformed a number of industries, not least of them automobile manufacturing and health services. Its benefits have been clearly shown in improved efficiency, reduced injuries, and healthier profit margins.

If you commit to it, it could completely transform the way your shop operates too.

Jacob Stoller is a journalist and facilitator who tackles technical subjects like lean, information technology, and finance.