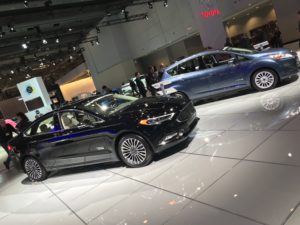 The Ford Fusion and CMax hybrid on display at the Canadian International AutoShow in Toronto in February 2018. Both will be axed in the next two years by Ford as it focuses its efforts on the light truck segment.

Ford’s decision to discontinue almost all of its car models in North America within two years will leave its Canadian operations intact, since they are focused mainly on sport utility vehicles and light trucks.

The car segment of automotive sales has been shrinking since 2012, while sales of sport utility vehicles have grown over the same period — a trend that’s expected to continue.

“So, we are focusing our efforts on vehicles customers prefer,” Ford Canada’s Lauren More said in an email.

Meanwhile, Ford two plants in the Windsor area make larger engines for F-Series pick-ups, E-Series vans and the V8 for the Mustang sports car, which will continue to be made in Michigan.

Apart from the Mustang, the only other car model that Ford will be making in future will be a new compact crossover called Focus Active, starting in 2019.

It’s not going to have any impact based on our current product portfolio in Oakville,” Dias said in an interview.

“Also, if I take a look at our Windsor engine plants … i think we should be all right there as well.”

However, Dias said there are longer-term questions about what Ford will do with the Mexican plants that make the Ford Fiesta subcompact and the Fusion mid-sized sedan and the Chicago plant that makes the Taurus full-sized sedan.

“It’s pretty difficult to make that prediction today based on volumes,” Dias said from Washington, D.C., where trade talks were being held between Canada the United States and Mexico.

Negotiations surrounding the North American Free Trade Agreement is another factor, he added.

“I don’t think you’re going to see Ford make any sort of major announcement in the facilities where they’re making the Fiesta and Fusion until after NAFTA’s done.”

Ford said Wednesday — when it announced first-quarter results — it’s aiming for an additional $11.5 billion in cost cuts and efficiencies, bringing the total to $25.5 billion expected by 2022.

Bob Shanks, Ford chief financial officer, told reporters Wednesday that he expects one-third of the cuts to be achieved by the end of 2020.L