Five fan cars to be displayed at 2016 AutoShow 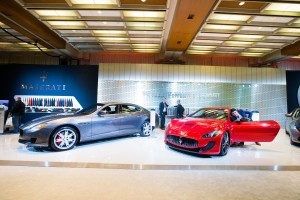 For five auto fanatics, this year’s Canadian International AutoShow will be more than simply checking out the many exhibits and features – they, along with their most prized vehicle, will be part of the show.

For the first time, the Canadian International AutoShow, happening February 12-21, 2016 at the Metro Toronto Convention Centre, invited members of the public to enter their automobiles for a chance to be featured on the show floor during this year’s event.

The Top Five Finalists, announced Jan. 20, will be bringing their cars with them to the show and competing for the top prize of $5,000 and a feature on their vehicle by Wheels.ca.

“We wanted to add a fresh, interactive component to this year’s show and give our audience a chance to get involved in a unique and fun way,” says Jason Campbell, general manager of the Canadian International AutoShow, presented by The Toronto Star and Wheels.ca. “Through our AutoShow Your Auto contest, we were able to uncover some of the most interesting vehicles and car stories that don’t often get the exposure or recognition they deserve.”

The AutoShow Your Auto contest, held from mid-December to mid-January, asked car owners to tell the story of their vehicles and passion projects. More than 75 vehicles from across Canada were entered into the contest – ranging from classic cars and exotics to street tuners and trucks.

Online voting combined with an AutoShow judging panel determined the Top Five Finalists, which are:

Each of the five finalists will have a custom video segment filmed with their vehicles, which will be displayed along with their cars at the AutoShow Your Auto exhibit throughout the duration of the show.

AutoShow attendees will be able to vote for their favourite of the Top Five at the show and a judging panel will ultimately decide on the grand prize winner.

For more details on the AutoShow Your Auto contest and to view the photos and stories of all submissions, please visit www.showyourauto.ca and check out the #CIASYourAuto hashtag on Twitter and Instagram.