Part 4 of 7 in an exclusive series

This is the fourth in a series of article on changing vehicle technologies – exclusive to the AutoServiceWorld Knowledge Centre. Award-winning tech writer Jeff Taylor offers a look at some of the latest innovations in the automotive world, how they work, how they’re evolving, and what they mean to the aftermarket.

Watching out for what you can’t see

Blind-Spot Detection systems are designed to warn drivers of the dangers all around them that they might not otherwise know about.

When I was first learning how to drive a car, my dad frequently told me to check my blind spots – the area that is not visible from the side mirrors and obscured by the B-pillar.

It’s good advice even today. But if drivers get lazy about it, there’s now an increasingly common technology that will do it for them.

With car designers taking as much of the vehicle out of the wind as possible, today’s blind spots are bigger than ever. Not being aware of a nearby vehicle – one that is cruising in the driver’s blind spot – is a major cause of collisions, causing an untold number of injuries and fatalities every year.

The new technology is designed to eliminate the cause of those injuries and deaths by providing a warning when there is something in a vehicle’s blind spot\.

Blind Spot Detection (BSD) made its debut in 2007 on a Volvo S80; it is now a common feature on many vehicles.

BSD has two variations: active and passive, and of course each manufacturer has developed their own way of doing things, and naming them uniquely with their own acronyms.

Ford calls its system BLIS, Blind Spot Information System. Nissan calls it the BSW (Blind Spot Warning). GM calls it Side Blind Zone Alert. These are just a few of the names that are currently being used… but the goal of the system is the same. They seek to monitor the vehicle’s blind spot and make sure drivers are never taken by surprise by an unseen object traveling beside them. 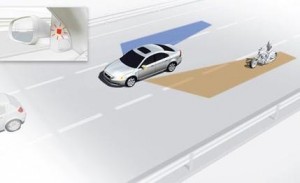 The BSD system monitors the driver’s side the and passenger side, focusing on an area that starts roughly beside the side mirrors and goes out across the adjacent lane 10’ before following the vehicle to the rearward approximately 20’.

These zones are monitored continuously as long as the vehicle is in gear and in forward motion.

The “passive” system was easiest to develop and cheapest to manufacture. Essentially, it’s a convex mirror on the outside edge of the side mirrors that increases the driver’s field of vision in the blind spot area.

The “active” system involves electronics, complexity and cost, but the system works semi-autonomously. The manufacturers are using a number of ways to detect vehicle as small as motorcycles and bicycles when they enter a vehicle’s blind spot. 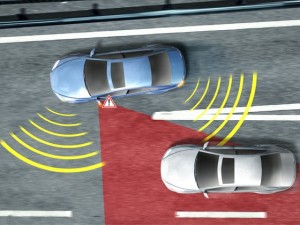 Cameras, ultra-sonic, and even infra-red sensors can be used, but radar is the overwhelming favorite. It’s used by most of the major manufacturers to sweep the blind spot area and provide warning information to alert the driver.

The radar sensors are typically mounted under the rear bumper cover/fascia or in the rear fenders to provide the needed coverage. The radar sensor (or multiple sensors, depending on the system) emits a pulse of radar beams that are interpreted by the radar module.

BDS systems can be stand-alone units that are self-contained in the actual radar sensor detector unit. They can also be single, dual, or multiple units, and may be integrated into other systems on the vehicle like lane departure or rear cross traffic.

Once the system is activated – typically by forward motion over a predetermined speed – the BDS system interprets the radar signals and decides if it’s going to provide the driver with a warning. The system is designed to filter out signals from barriers, guard rails and a host of other things on the road to limit false alarms. But if it decides that a vehicle is in or approaching the blind spot area, it will warn the driver with a visual queue in the side mirror or the A-pillar. 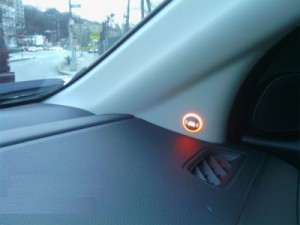 Mercedes-Benz and others provide a visual graphic display on the instrument panel. If the driver has the signal on to perform a lane change and the BSD system senses a vehicle, the visual queue will flash, and some systems may provide a haptic warning (shaking the steering wheel or seat) or an audible warning.

Infiniti takes the warning a step farther and will even apply suitable braking to prevent a collision. The other popular scheme for BSD uses a camera (or several cameras) for detection. Volvo’s original BSD used a small camera mounted on the side mirror that took 25 pictures a second. From these pictures, it gleaned enough information to determine if a vehicle was in the blind spot. Again, it used a visual queue in the A-pillar to alert the driver.

Other system use a combination of cameras and radar sensors to fine tune the system.

Honda’s LaneWatch is yet another variation of BSD. When the right signal is switched on, a small wide-angle camera in the passengers mirror is activated. The centre instrument display panel will show what the camera is seeing with three distance estimator lines to aid the driver with the passenger side blind spot and distance judging for lane changing maneuvers.

Honda chose to use a passive system on the driver’s side by installing a simple convex mirror.

Most but not all active systems can be manually turned off by the driver, some can’t be and some automatically turn back on at the next ignition switch cycle.

What are we going to see in the shop?

The setup, diagnostics (clearing or retrieving codes) and recalibration of the blind spot radar detectors is manufacturer-specific and will definitely require a scan tool.

The collision industry has to pay particular attention to alignment, paint thickness and repairs in the area of the radar sensor. Plastic bumper cover repairs, filler, and body putty could all affect the BSD unit’s performance so again the manufacturer’s repair procedures must be followed carefully. 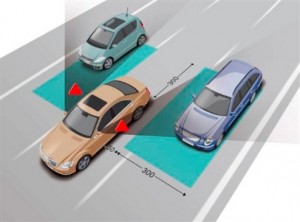 If a customer damages the right side mirror equipped with the Honda LaneWatch camera, it has to be recalibrated. The procedure is tedious but can be done without a scan tool, using the dash display, careful measurements and a dot covered target set up.

Radar will become the norm for BSD over the next few years; older systems (ultrasonic) will be phased out.

The demand for collision avoidance sensors and technology is on the rise. Global sales of anti-crash sensors are predicted to be worth a total of $9.90 billion in 2020. 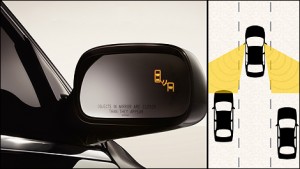 The use of a camera or cameras to give a better field of view and coverage will be integrated into the BSD system, in combination with radar and LIDAR units. BDS systems are being designed that will allow future vehicles to change lanes automatically to avoid collisions. But in order to do this, they will need to have a highly accurate BSD making sure nothing is in that lane.

Vehicles are now being developed without side mirrors. Mirrors create drag, wind noise, and higher fuel costs. The use of cameras, radar, and display screens on the dash will eliminate those negatives while still giving drivers a 360-degree view around their vehicles. Some high-end vehicles are already at this stage.

The insurance industry believes 26% of all claims involve a side mirror and their elimination would certainly lower insurance costs.

BSD may not be something that you thought was needed… but with safety, collision avoidance, and autonomous driving around the corner, it’s a system that is here to stay.