A good understanding of exhaust after treatment systems and the right tools and information are critical to addressing any diesel issues. 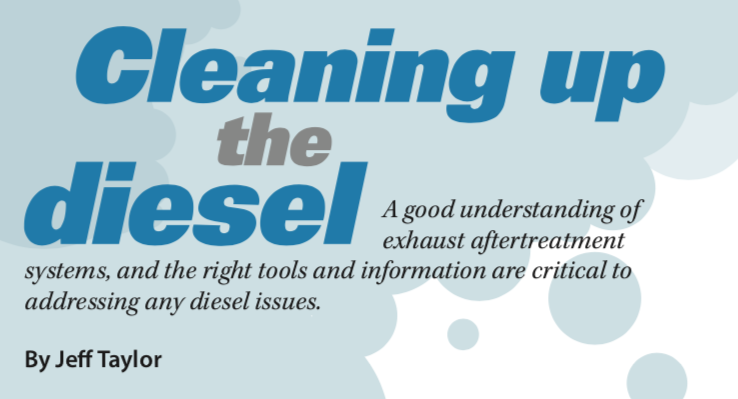 Engineers in the automotive industry have known for years that a diesel engine’s torque and fuel efficiency make it very attractive to certain drivers and for certain tasks.

But the diesel engine also has an ugly side. Most notably, it emits soot and high levels of nitrogen oxides (NOx).

To meet the tough emission controls in place around the world these emissions had to be dealt with. Several strategies have been devised to do exactly that. Used alone, together, or in various combinations, these strategies can remove as much as 99% of the soot and particles that a diesel engine produces.

A diesel oxidation catalyst (DOC) performs the same basic functions as a gasoline engine catalytic convertor. It oxidizes carbon monoxide (CO), hydrocarbons (HCs) and nitric oxide (NO) in the exhaust gases, turning them into water (H2O), carbon dioxide (CO2), and nitrogen dioxide (NO2). The NO2 can then be used to oxidize diesel soot in the DPF (more on this in a bit).

Selective catalytic reduction (SCR)involves injecting liquid diesel exhaust fluid (DEF) into the exhaust system to react with the NOx and turn it into harmless NO2, H2O and oxygen (O2). This strategy can reduce 90 percent of NOx emissions, while simultaneously reducing HCs and CO emissions by 50-90 percent, and particulate matter by 30-50 percent.

The catalyst used in the SCR can be wash-coated with platinum, palladium, rhodium, or iron zeolite, but the most common coating is copper zeolite due to its heat tolerance and ammonia storage capabilities.

A lean NOx trap (LNT) uses a NOx storage catalytic convertor to absorb and store NOx in the exhaust. The substrate of the convertor is coated with a NOx-adsorbing wash containing zeolites or alkali/alkaline oxide. When the trap is full, the engine management system will inject a small amount of extra fuel into the cylinders during the exhaust stroke, triggering a burn cycle that burns off the stored NOx, turning it into harmless NO2 and O2.

The LNT system isn’t as effective at reducing the NOx emissions as the SCR system is but it is substantially cheaper to manufacture, requiring fewer parts, and less space to operate. These qualities made it especially suitable for use in smaller vehicles.

And, finally, a diesel particulate filter (DPF), removes the small particulate matter that’s left over from the combustion process. It captures the soot and stores it until it can be oxidized, using a process called thermal regeneration. NO2 oxidation is now the leading regeneration mechanism in most DPF systems equipped with a DOC because the soot burning takes place at a lower temperature.

There are two types of DPF thermal regenerators: passive and active. Both types transform the soot into CO2 and ash. Eventually, the DPF will fill up with ash and will need to be cleaned or replaced. The powertrain control module keeps keep of the amount of ash in the DPF.

Passive regeneration occurs whenever the exhaust gases flowing into the DPF are at a temperature high enough to burn the soot in the DPF. This process can happen under normal operating conditions, especially if the vehicle is under heavy load. On 2011-2016 GM Duramax diesels engines, passive regeneration takes place any time temperature in the DPF is above 427°C (800°F).

Active DPF regeneration happens when the PCM senses that the DPF is reaching its maximum filtering capacity and needs to be cleaned. When this occurs, the PCM will inject extra fuel into the exhaust, either from the actual engine fuel injectors or from a separate fuel injector in the exhaust stream upstream of the DOC. This increases the exhaust gas temperature to facilitate the burning of the soot.

BMW diesel engines can inject up to eight times more fuel per combustion during an active regeneration. That produces enough NO2 to burn the soot particulates and increase the temperature as the exhaust gases pass through the DOC and DPF.

Nitrogen in the air forms NOx gases when combustion temperatures reach 1300°C (2370°F). The EGR allows exhaust gases back into the intake stream and because most of the oxygen has already been consumed by the previous combustion event it will lower the combustion temperatures (exhaust gas also has a higher heat capacity and takes longer to heat up). The precise management of the EGR system and its operation is essential for proper engine operation. Too much EGR gas can reduce engine power and lower fuel efficiency.

The SCR requires numerous other components: a DEF storage tank, DEF heater (because DEF freezes), a pump, valves, a DEF injector, tank level sensors, and other pressure and flow sensors. Both the LNT and SCR systems require extra sensors that monitoring pressure, NOx and O2 concentration, temperature, and a host of other parameters.

The use of the SCR, DOC, LNT, DPF, and EGR on diesels has been a concern since 2009 when most major diesel exhaust aftertreatments became mandatory. Unfortunately, failures in the various sensors are quite common. Fortunately, they’re fairly straightforward to diagnose if you have the proper scan tool and correct service information.

The sooty nature of diesel exhaust commonly clogs the pipes and passages of the EGR systems, so EGR cooling system failures are also common.

In fact, when the EGR cooler on the Ford 6.0 Powerstroke fails due to overheating, the coolant inside can boil, leading to ruptures and serious leaking into the exhaust manifold. The result is a mess that often looks like a bad head gasket.

Pumps, injectors, and heaters are also prone to failure. GM extended the warranty on its DEF tank assemblies to 10 years or 193,000 km, due to heater failures that caused the malfunction-indicator light to go on. 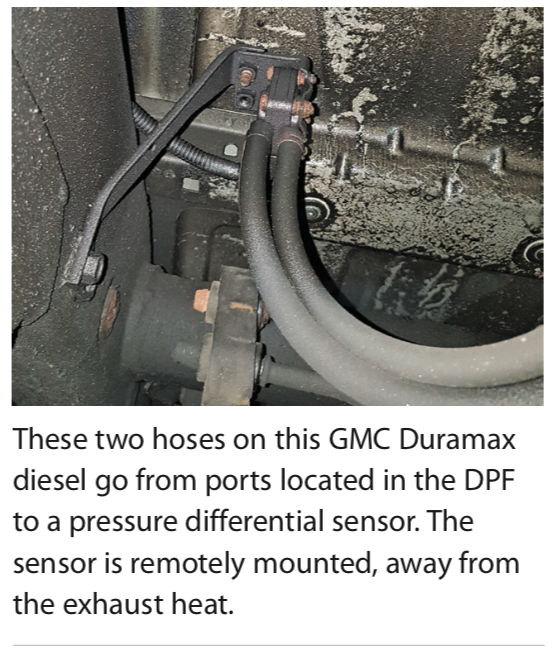 But the two most common complaints we tend to see are the failure of the system to properly regenerate the DPF, and a malfunction in the SCR system caused by low DEF fluid levels.

Low DEF fluid level is considered a malfunction on most systems. Whether the fluid is actually low or a faulty sensor just thinks it’s low, the condition can limit driving distance, speed, and the number of starts. It’s not unheard of for the vehicle to go into limp mode until the fluid is refilled. Many times, refilling the DEF system and clearing the codes is all that’s needed. But in more drastic situations, physically resetting the DEF level using a factory scanner may be required.

The lack or failure of the exhaust to get hot enough to perform a regeneration is common on vehicles that are driven in city traffic, under stop-and-go conditions or on frequent short trips. In these cases, codes or dash lights for partially plugged/blocked or restricted DPF units are common. These situations usually require either a forced or active regeneration to take place. In the worst case, the DPF will need to be replaced.

Regeneration of the DPF can often be done using a scan tool and forcing an active regeneration, if that feature is available. The vehicle manufacturer usually provides detailed information on how to perform this operation. It’s important to follow all the steps and observe the safety procedures and placement of the vehicle as the exhaust system heats up.

Many times, an active regeneration can be initialized by following a few simple steps without a scan tool. There must be no fault codes in the engine or exhaust treatment management systems, no EGR codes if equipped, at least half a tank of fuel, good DEF fluid level, and then the vehicle must be driven at a constant speed of at least 100 km-h for 20 minutes.

I wish I could share some sure-fire tips for servicing DFE, SCR and DOC systems. The truth is they are very finicky and I’ve spent many hours (and many kilometers!) trying to get regenerations to occur. Even registering that I’ve refilled the DEF can be a challenge. Attention to even the smallest details is key: road speed, engine load, proper fuel level, DEF level, DEF temperatures, and engine operating temperatures are all important.

It’s a good idea to educate your customers on what they have to do to avoid problems with their diesel exhaust aftertreatments. Maintaining proper DEF levels is job one!

When a problem does limp into the shop, make sure that you have the proper service information to diagnose trouble codes. Factory information is often needed.

And before you begin a diesel exhaust aftertreatment repair, ensure that your scanner is up to the job. Not all of them are, and you don’t want to get stymied half way through! 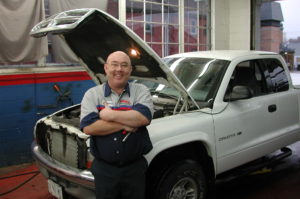