Oil-change intervals may be increasing, but engines have never been more reliant on a steady supply of the correct specification of motor oil to ensure efficient operation and long life. 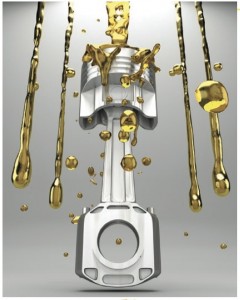 New vehicles have never been better.

They’re more reliable, they get better fuel economy, and they produce far fewer emissions than the vehicles of yester year.

Manufacturers have been able to make massive improvements in their products, using more efficient manufacturing processes, better materials, and new electronic controls that keep their engines at stoichiometric perfection, even from the coldest start.

Being able to achieve this has meant constant transformation under the hood. We’ve moved from carburetors to gasoline direct injection (GDI). EGRs have given way to variable camshafts. And they’ve gone as far as to use electronics to vary the output and pressure of the oil pump.

But a high level of vehicle reliability would not have been possible if the oil that lubricates the engine assembly’s moving parts hadn’t kept up with the advancements in technology.

Engine oil is still doing the same job it did when the engine was first designed. It lubricates the moving parts, reduces friction, removes heat, holds contaminants in suspension, and provides a myriad of other benefits that keep a motor running smoothly. Yet, perhaps because it looks the same as it always has, technicians and vehicle owners alike seem to take it for granted. They don’t give much thought to the vital role it plays in vehicle health. They’re likely to overlook it.

I believe we’re all starting to see the results of this attitude at our shops.

Over the past three weeks, I’ve seen a number of different vehicles with a variety of issues that can all be traced back to oil.

The first case involved a 2002 Honda CRV that showed up with a check-engine light on. The customer had owned the vehicle since new and had maintained it with moderate diligence. It had about 117,000 easy kilometers on the odometer.

This vehicle had been relegated to “back-up” status. It was a spare family ride that the kids drove when they were home from school. It was equipped with an oil-life monitor system, but that light (which would have indicated a need for immediate maintenance) wasn’t on, so when the son came home for the weekend and started out on a road trip from Hamilton to Montreal, no thought was given to any underhood problems.

The CRV started and ran fine; it had heat and a full tank of fuel, so off he went. After a couple of hours on the road, however, the check-engine light flicked on and the usual panic set in.

At the next service station, the hood was popped and the driver did the only thing that most customers know how to do: he checked the oil level. It was low, so he topped up the level and resumed his trip. Once back home, he told his folks about the incident and they brought the vehicle in for us to investigate the cause of the light.

I installed the scanner, and pulled out the trouble codes, they all pertained to the VTEC system that Honda uses for performance and emission control. This system requires engine oil and because the level was so low, it couldn’t operate properly, which set the code and turned on the check-engine light.

The customer had no idea that the engine oil was low and that it hadn’t been changed in over a year because the oil-life monitor light had not been illuminated.

Oil-life monitors are not new. They’ve been around for a while, but the Honda system like most manufacturers is counting on the customer to maintain the proper oil level in the engine. It is even stated in the owner’s manual that the engine’s oil level should be checked at each fill up and that in Canada the oil should be changed at least twice a year regardless of mileage.

After performing a service and explaining to the customer how the oil-life monitor works, the vehicle is back on the road, functioning normally.

The second case involved a 2011 Buick Enclave with a 3.6L V6. The customer wanted the spark plugs changed. Well, this involves removal of the upper plenum/intake to gain access.

Once we removed the parts, we could see down to the back of the intake valves. They were covered with the hard crusty, impossible-to-remove coating of carbon that the GDI engine is known for.

The GDI doesn’t have any fuel spraying on the backs of the valves so the detergents in the fuel have little effect when it comes to keeping the valve clean. Some GDI engines have been notorious for these deposits, especially in early GDI adapters like Hyundai, BMW, VW, and Mini.

The issues seem to be compounded by the use of an EGR and the design of the PCV or crankcase ventilation system. Many of these issues have been addressed in newer engine designs but complications still arise.

GDI engines need oil that has a low volatility rating to prevent oil vapors from forming and being drawn into the crankcase ventilation system, where they tend to condense and stick to the back of the intake valves (along with any seepage from the valve stem seals).

Engine oils contain an additive package that could make up 20 to 25% of the oil’s actual volume. There are additives to suppress foaming, enhance viscosity, and serve a number of other functions according to the manufacturer’s requirements. One of the most imperative additives keeps volatility low. The engineers don’t want the oil to evaporate; they want it to say in the engine doing its job.

This property is even more important on a GDI engine. The specification for this additive is known as “the NOACK percentage” and is the results of the NOACK test (ASTM D-5800) that determines the amount of oil that will evaporate under certain test conditions. GDI engines need a low NOACK rating. Dexos, the GM proprietary oil that has been recommended in most GM engines since 2011, has a NOACK of 13%. Standard SN/GF-5 oil has a 15% rating. Some cheaper oils may have a higher NOACK rating, allowing the oil to vaporize more quickly.

Another problem is driving style. Short trips that never get the engine up to full operating temperature will allow excess fuel to accumulate in the oil, especially when it’s below freezing. This dilution puts stress on the additive package and can accelerate oil vaporization.

Not changing the oil frequently enough is also a killer on the additive package. Most manufacturers recommend bi-annual or annual services as a minimum, but this is assuming the oil level is kept at the proper level. If the oil level drops, the additive package will have to work harder as there is less of it to do the job… and this can further accelerate the oil’s degradation.

In the case of the Enclave, oil changes were not a priority for the owner, and when they were done, it was at quick lube shops and discount stores where the proper oil (with the correct Dexos spec) was not always used.

The GDI engine is susceptible to intake valve deposits but with proper service and the correct engine oil this could well have been prevented or at least postponed.

The third case involved a 2007 Subaru Legacy, with a complaint of a buck or surge from a stop.

First thing I noted was that the check-engine light was on. I did the usual: road-tested the vehicle, verified the complaint, and brought the car into a bay for diagnostics. I did a visual inspection and even checked the oil (it was at the right level and looked fine). I attached a scanner and retrieved the trouble codes, noting that it had camshaft control codes for both the left and right banks.

I’ve dealt with the leaking oil pressure switches that some Subarus have but this was the turbo boxer-style engine with a similar but different setup.

I don’t have a lot of experience with Subarus, so I did a quick search on the Internet and checked an information service that we subscribe to. I found tons of information on a small filter that was located in an oil-feed line banjo bolt. After some disassembly, I got to the banjo bolt, removed it, and found that, sure enough, the small filter inside was plugged solid.

The oil-feed line formed a tee and part of the oil that has passed through the filter went directly to the middle of the turbo charger. The other line went to the camshaft actuator. There was no pressurized oil flow going to the cam actuator and this was causing the cam codes and check-engine light. Furthermore, in the short time that the turbo charger had been deprived of a steady flow of lubricating oil, it had been completely destroyed.

Subaru is aware of this issue, and has even issued a TSB about the problem. Unfortunately, they have not informed their customers that the oil-change interval has been shortened, that only their proprietary Subaru oil filter should be used, and that the small banjo bolt filter should be changed as part of routine service.

The average customer gives little thought to their oil and filters. Not only do most modern vehicles have oil-life monitors, but the extended service intervals give a false sense of security. It is true that modern engines don’t burn oil like the engines that our grandfathers’ cars used… but vehicles still have to be properly maintained and the correct oil must be used.

In the aftermarket, we still tend to push the traditional 5,000-kilometer oil change. But as manufacturers improve their engines and alter not only the oil itself, but how the oil does its job, we need to adapt. We also have to educate our customers on how the oil-life monitor system works on modern vehicles, and what requirements have to be met to make their vehicles last as long as possible.

Jeff Taylor is senior tech at Eccles Auto Service in Dundas, Ont. You can reach him at jeff@ecclesautoservice.ca