Coolant mapping is a new strategy to balance performance and emissions demands as engines continue to evolve. 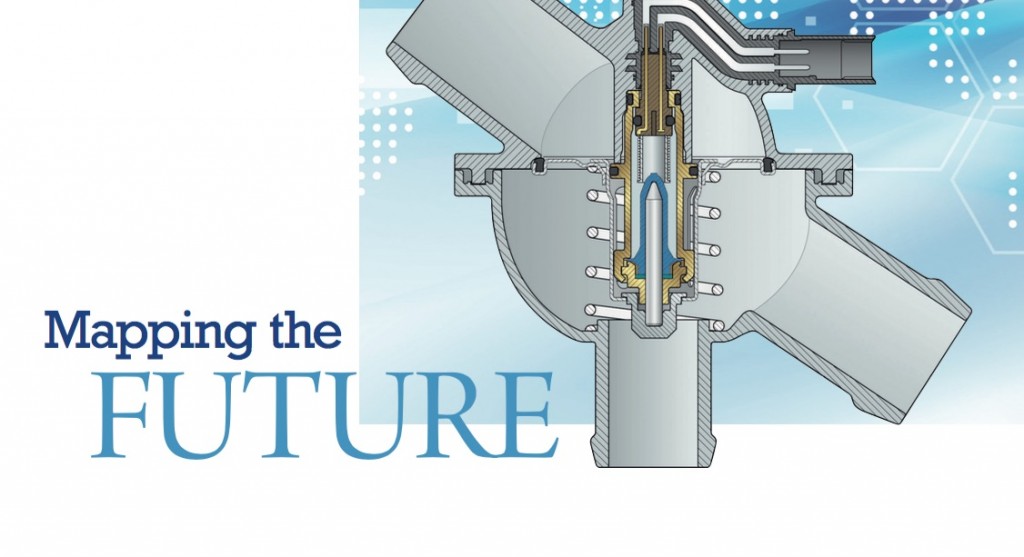 Have you heard the term coolant mapping? If you haven’t yet, you will. It’s one of the tactics engine designers are turning to in order to meet evolving performance and emissions demands.

When the first internal combustion engine was built for general use, there was no water pump or thermostat involved. It just wasn’t needed. The engine used a thermo-syphon cooling system to move the warmed coolant to the rad where airflow would remove the heat.

As engines became more powerful, the need to better control the heat from combustion became apparent. Components were added. Coolant pumps were introduced in 1910 to force coolant circulation. And thermostats made their first appearance in the early 1920s to regulate coolant temperature.
These days, with ever-more stringent emission levels, demands for higher fuel economy, better drivability, and improved engine performance becoming the norm, engineers are looking at every aspect of the modern engine for any small gains. It’s fair to say the area of engine cooling has come under close scrutiny.

The familiar expanding wax pellet is still the most popular way of regulating engine coolant temperature. But to realize gains in performance and fuel economy, engineers have been focusing on two new methods: a mapped thermostat (very popular on European models) and a controlled cooling system design. 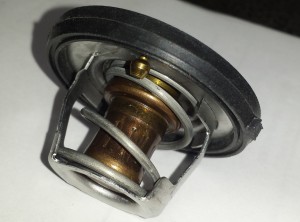 This setup has proved very reliable for many years, and by adjusting the mixture of the wax pellet expansion material composition, varying opening points in the cooling system can be achieved.

The heating element of a mapped thermostat and the wax pellet that opens the thermostat (photo courtesy of Mahle).

If these two characteristics – maximum power and fuel economy – could be combined, you’d have the best of both worlds. That’s exactly what a mapped thermostat achieves.

The mapped thermostat still uses a wax pellet to open, and a spring to close, but it also incorporates a small heater inside the wax pellet that can be controlled by the PCM. Using a combination of inputs such as engine load, engine RPMs, vehicle speed, intake air, and coolant temperatures, the PCM can now control the characteristics of the thermostat.

But if the PCM decides (from operator input signals) that a cooler engine temp of 185°F (85°C) is required for higher speed or high-load operation, a pulse width modulated heater circuit is actuated and the stat will open at a lower coolant temperature giving better performance.

As soon as the PCM sees that those conditions have been removed (the driver has backed off on the throttle, or exited the highway), the heater circuit control slows current flow to the heater and the stat returns to normal wax pellet operation, with a set point of 230°F (110°C) again.

This, in effect, gives the PCM a number of new operating modes unavailable with a standard wax pellet thermostat. This ongoing temperature regulation goes unnoticed by the operator and can happen many times during a typical drive.

In the event that the thermostat goes bad, the wax pellet will still function as a failsafe and trouble codes will be set to alert the driver of the situation.

One major advantage to the mapped thermostat design is that it doesn’t take much to incorporate it into current engine strategies or architecture, and doesn’t really require any major systems to be redesigned. 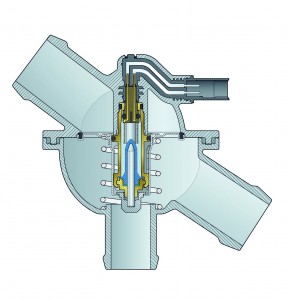 A mapped thermostat, in coolant housing (photo courtesy of Mahle).

It will, however, require the use of a scan tool to diagnose the system, since a mapped cooling system can set a number of codes and can be bi-directionally controlled in some cases to make diagnostics easier.

The use of an electrically controlled thermostat is not the only way that the cooling system can be “mapped” or “controlled” for better overall efficiency.

Ford uses an arrangement of control valves to control coolant flow on its 1.6L EcoBoost engines. The idea is to warm up the engine as fast as possible, reduce the internal engine’s operating friction and, in turn, lower emissions and heat the passenger compartment faster. This engine still uses a conventional wax pellet thermostat, as well as thermo-syphon cooling to cool the turbo when the engine is shut off, but fine tuning of the cooling system incorporates a coolant shutoff solenoid valve, and a coolant bypass solenoid valve. These valves are controlled by the PCM using a low-side driver. They allow the PCM to calibrate and tailor the coolant flow in four distinct operating phases.

Phase 1: With an ambient temperature of 60-75°F (16-24°C) or above (the temperature range can be customized by the engineers) both the coolant shutoff and the coolant bypass solenoid valves are closed. The coolant does not circulate in the engine or through any other cooling circuits. This lack of flow significantly reduces the warm-up time of the engine, and reduces start-up emissions. It also lowers fuel economy during warm-up.

Phase 2: With an ambient temperature of 60-75°F (16-24°C) or below (again, the range can be customized) the coolant shut-off valve is opened, allowing coolant to circulate through the engine into the heater core, engine oil cooler, transmission oil cooler, and around the bottom of the thermostat housing to warm the thermostat.

Phase 3: When the coolant reaches 158°F (70°C) and the engine load is greater than 70%, or the engine is revving greater than 4000 RPM, the coolant bypass solenoid will open. This allows more coolant to flow from the engine to the thermostat housing, increasing the coolant flow through the engine, reducing cooling system pressure, and better regulating temperature variations in the engine block. 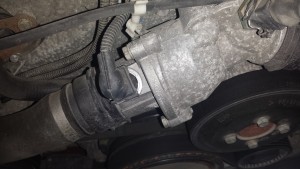 The mapped thermostat connection and housing in a BMW.

Both of these solenoids can set trouble codes for circuit diagnostics and electrical faults and the standard thermostat codes P0128 and P0125 can result from a bad wax pellet thermostat, and low coolant, just like before. And, yes, there was a recall on some of these engines for a failure of the bypass valve that allowed the engine to overheat.

The mapped cooling system has been very popular on European vehicles for a number of years now, but it’s being used here by some domestic manufacturers. GM has been using a mapped thermostat in a few models, such as the Chevy Cruze Eco version, and they’re starting to incorporate it onto the 3.6 V6 engine used in many of their models.

Other technology is being used to enhance the cooling system. There are now split systems in hybrids, parallel-, cross-, and reverse-flow coolant patterns in the engine – all in the drive to make the cooling system more efficient. 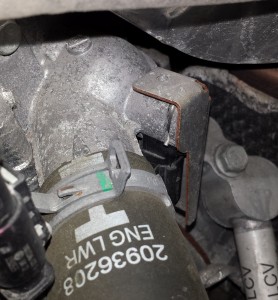 The mapped thermostat connection and housing on a GM Malibu.

GM has developed a patented technology called “targeted cooling” that provides deliberate cooling of the hotter parts of the engine, while still providing faster warm-ups to lower emissions.

Manufacturers have integrated the exhaust manifold into the cylinder head assembly to speed up coolant heating and reduce the emissions the engine produces.

Vehicle manufacturers are under intense pressure to produce cars and trucks that produce fewer emissions. Closely regulating the cooling system is one way to do that. By achieving finer control of existing systems and using different techniques to regulate temperatures, they’re able to squeak a little extra distance out of the fuel being burned, while still creating less pollution.