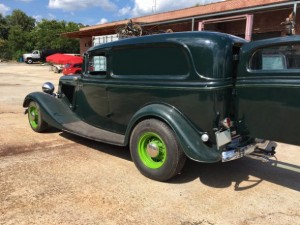 As OTC Tools gears up to celebrate its 90th anniversary this year, it plans to pay homage to one of its sales tactics from the late 20s/early 30’s – the OTC Tool Truck.

In the early years as OTC was just getting started, salesmen would travel door to door nationwide in panel trucks bearing the OTC name equipped with catalogues to sell tools directly to service stations and garages.

Local mechanics, farmers and peddlers from Owatonna, Minnesota were some of the first to buy and utilize OTC tools. As the demand for these tools grew, however, OTC Tool Trucks began traveling longer distances venturing to service stations and garages all over the country. OTC attributes its early expansion to the use of the tool trucks.

To commemorate the panel tool trucks that paved the way for the company’s success, OTC has partnered with the experts at Fuller Hot Rods to design and restore a 1934 Sedan Delivery Ford into a vintage OTC Tool Truck to be unveiled at SEMA 2016.

The OTC Tool Truck will be completely reconstructed including a rebuilt chassis and engine, implementation of new electrical systems, and extensive body work, completed exclusively with OTC tools and products.