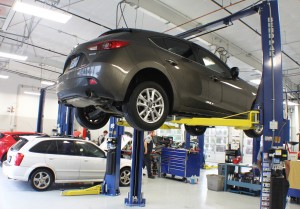 When vehicle service was in its infancy, pits and jacks were about all that was available to gain access to the under-side of a vehicle.

In most cases, what little clearance you could create still required you to lay flat on your back on a sliding creeper or, worse, on a piece of cardboard.

That certainly isn’t how most technicians want to earn a living these days!

Never mind the danger of a falling car, or the awkward way you had to use your tools, it was physically tough on your back, your legs, your shoulders… 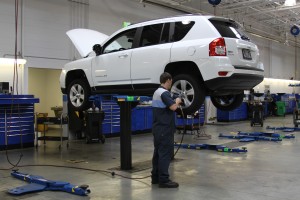 Thankfully, back in 1924, the vehicle lift was developed, modeled after a barber’s chair.

It’s probably one of the most-used pieces of equipment in any modern repair shop. Our job frequently requires us to elevate a vehicle in order to gain access to the undercarriage and remove components for inspection or replacement.

This holds true for anything that moves: cars, trucks, buses and, yes, even trains. Eventually someone has to get underneath to fix them.

The lift – or the hoist as some prefer to call it – has been around for a long time, and technology has had a big impact on it over the years. In the last few years, new developments in lift technology have been driven by a wide variety of factors, from environmental safety to technician needs to vehicle design.

Let’s have a look at the different types of lifts that are currently available and cover some of the pros and cons of each type. There are basically two groups: above-ground and in-ground. 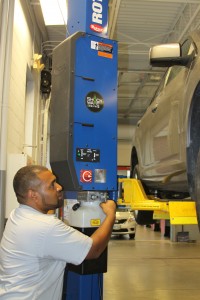 The in-ground hoist is out of the way when not being used so it gives you access to the entire vehicle and there’s little to get in the way. No pushing a vehicle forward or backwards to open doors to gain access. They can be set up with a number of options – from different arm-types, arm-lengths and weight classes.

They can also be set up with alignment equipment or flat drive-on pads, with the tech using special blocks to lift the vehicle. If you’ve never seen one of these, they’re amazingly simple. The speed with which you can set and lift a vehicle is stunning – especially if you’re working on very similar vehicles all the time, or using it for quick repairs or services like tires or oil services.

My favorite is the in-ground twin post, the main advantage of which is that it is particularly suited to narrow shops or bays. In-grounds traditionally take up less space. A large shop that moves from above-ground lifts to in-grounds will likely gain significant room.

In my case, I don’t have a lot of room on either side of my bay. The posts of an above-ground lift would get in the way in an awful hurry. My old single-post in-ground still works well, raising and lowering cars far faster than my new one, but the superstructure was always in the way when I needed to go under the vehicle.

Getting a truck positioned just right could particularly be a chore. Anyone who has been in this business as long as I have will probably have one or two bent drive shafts in their past!

The in-ground lift is arguably the most productive lift design available and it probably has the longest working life too – though not without some drawbacks. The installation costs are higher than an above-ground lift. You have to dig a hole to put it in, and once installed, it’s really a permanent fixture. They can be moved but it will involve an excavation and plenty of disruption.

The older single-post design tends to be in the way when you’re doing some jobs and it isn’t near as easy to set the vehicle on. There tends to be lots of crawling and reaching underneath.

Another drawback to the in-ground lift is the potential for older models to leak oil right into the ground. Older models used to hold as much as 60 gallons of oil. Servicing these was a terrible job. New models have solved that problem. For one thing, they require a much smaller amount of oil need (five gallons or less). More importantly, though, the whole assembly is contained in a giant plastic tub that keeps contaminants in and ground water out.

The tub or ‘cassette’ also allows for far easier and faster service and maintenance once it has been installed.

The above-ground lift contains a few different variations but each has its forte, depending on what it’s going to be used for.

For general service and vehicle maintenance, the twin- or two-post design is the runaway favorite. It comes in two configurations: symmetrical and asymmetrical.

This style of lift is the easiest, fastest and most economical to install; it simply bolts to the floor. It can also be relocated if you redesign the shop or if you’re moving to new premises. And there are no concerns about contaminants in the ground since it’s all above grade.

Twin-posts are easy to set, maintain, and service. They come with a wide variety of arm and adapter configurations. The twin-post does have its drawbacks though. The columns can get in the way. Door damage is not uncommon – especially if you get careless. And they can limit the height of the vehicles due to the overhead crossover bar. Another surprising fact is that they tend to have a shorter lifespan than in-ground hoists, usually 10 to 15 years.

Above-grounds lifts with a four-post design are most commonly used for alignments, exhaust, and simple service work (oil changes).

The four-post design is easy to install. Again it’s bolted to the floor and there are many different configurations. You can specify varying widths, lengths, and lifting capacities, and add options like rolling air jacks and alignment pads. The fronts can be open for alignments or closed for general service, and they can be designed to drive straight through from one side to the other. Similar to the twin-post, they can be moved if needed and, again, there’s no oil underground.

Shortcomings of the four-post design include its size. It’s big and takes up lots of room. It can hinder movement whether they’re up or down. And if you don’t get the correct crossbeam style, front-end service can be a chore and not very productive.

As we’re starting to see, different kinds of lifts have been developed over the years to suit a wide range of applications. Each shop has a unique layout and services its own set of vehicles. The best lift options for a shop reflect the kind of work that is done there.

The options also include two more lift designs that I would lump together as hybrids or specialty hoists.

The scissor lift is best suited for simple services, and work on wheels, tires, brakes and exhaust. It’s predominantly an above-ground option, but there are some models that can be embedded into the floor as well.

They have many of the same features as the twin- and four-post models, installation is fast, and relocation is possible. They even come in portable models. But the mechanism that does the lifting can limit your working area and may even get in the way, depending on the layout of your shop.

The low- or mid-rise lift is used primarily to increase efficiency where ceiling height is a limiting factor. They can be used outside, allowing for quick, safe access for wheel removal, body and brake work. Like the scissor lift, it can be portable, and installation is both economical and relatively easy. Most low- or mid-rise lifts only raise a vehicle two to four feet off the ground, max, so this limits the type of under-vehicle work that can be performed.

Like everything in our industry, things change – mostly for the better. Vehicle lifts are no exception.

* Safety has become a very important consideration, and all new lifts will have a number of safety systems built into them, things that weren’t available all that long ago. For example, mechanical or air locks are now standard.

* The lift industry has also grasped that technician efficiency is extremely important to a shop. Manufacturers have realized that the amount of time spent raising and lowering vehicles matters. They’re constantly making controls easier to access and increasing the lift speed.

* Some models can now be run on rechargeable batteries so even when the power goes out, they will still go up and down a number of times. No more stranded cars!

* The new lifts don’t require the use of huge amounts of compressed air, which is a cost savings through reduced energy usage.

* They have very little oil in them these days. If you want, you can even specify environmentally friendly plant-based oil.

* Plastic cassette enclosures have put an end to ground contamination due to leaking fittings or cylinders.

* There are plenty of work-enhancing adapters and accessories. A real convenience is the ability to hold the wheel assembly at a convenient height for the technician, making bending over to pick up a wheel a thing of the past.

Improvements like these will only continue, making our job easier and safer, and making us more proficient.

With all the new technology available in the lift industry if you’re about to expand or replace a lift, make sure you look at all the options available. And always look for ELI and CSA certification before you commit to a particular make or style.

The right lift will suit the layout of your shop, the kind of work you do, and how long you expect to stay in that location.

And remember to talk to your techs to find out what they like in a lift. They’ll have opinions. It’s best to hear them before you buy because they’re the people who will be will be using it every day. It will affect their efficiency and throughput… and that affects the operation’s bottom line.

Remember the lift was invented to increase their productivity and make their job easier.

Jeff Taylor is senior tech at Eccles Auto Service in Dundas, Ont. You can reach him at jeff@ecclesautoservice.ca