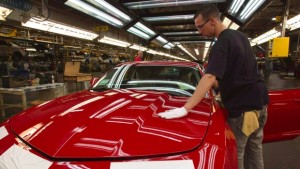 There were record auto sales in Canada in 2015, but the industry itself is shrinking, according to industry analysts.

About 2.3 million cars and light trucks were built in Canada last year, a 5.5% reduction from the previous year, according to a report from BMO Financial Group.

“Despite the strong short-term results, the Canadian auto assembly industry is struggling to grow,” said Michael Burt, director of industrial economic trends for the Conference Board of Canada.”Over the next five years, no growth in production is expected in Canada.”

Scotiabank also forecasts a flattening of Canadian auto sales for 2016, as provinces reliant on the resource sector experience declining sales. However, provinces with strong manufacturing sectors will see improved sales of cars and light trucks as consumers take advantage of low interest rates.

For 2015, Canadian auto sales climbed a stronger-than-expected three per cent to a record high 1.9 million units. The Conference Board points to low gas prices as stimulating demand for trucks and cross-over vehicles.

In the short-term, that will be good for Canadian auto manufacturing as automakers are moving production of cars into Mexico and the southern U.S. and retooling here to create higher-value vehicles.

Toyota Canada plans to end Corolla production in Canada and replace it with the crossover SUV, the RAV4. Ford retooled its Oakville, Ont., assembly line to build the Edge, also a crossover vehicle.

GM continues to be undecided on ongoing production in Canada, as it has not committed to assembly in Oshawa beyond 2017. However, it  did extend production on the line beyond 2016 because of strong demand for the Equinox.

Labor negotiations in 2016 may play a key role in whether the Detroit Three automakers direct new models to Canadian plants, Burt said. The low Canadian dollar may help the Canadian union make the case for more work in Canada, as it is lowering costs here, however, he warned much will depend on how Canadian labor costs compare to the U.S.

The falling loonie is also helping boosts profits in Canada, as much of our auto trade is with the U.S. Exports of motor vehicles and parts totaled $7.9 billion for November 2015, up 5.9% from the year before, and overtaking energy exports in value. That has helped the bottom line for automakers in Canada.

Revenues for the auto sector are forecast to grow by 8% in 2015 and by slightly more than 7% cent in 2016, the Conference Board says. But Burt predicts those kinds of increases will fade past 2017 if GM pulls out of Canada.

The Trans-Pacific Partnership also may eat into opportunities for the Canadian auto sector as it will be easier to sell vehicles with TPP-made parts into the Canadian market.

“While the impact of the Trans-Pacific Partnership (the TPP) agreement is still somewhat uncertain, it is expected to heighten competition for Canadian assemblers and parts manufacturers,” Burt said.That won’t affect anything for years, he added. “It’s not even ratified yet. Any impact will be years down the road.”