In a 76-page report, the Senate says 'the government must act now' to prepare for the future of transportation, which includes automated and connected vehicles. 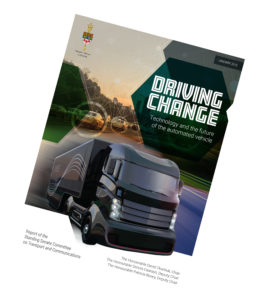 This country needs to strap up its boots and get ready for an automated and connect future of mobility, according to a new report from Canada’s Senate.

“Canada is ill-prepared for the fast-approaching future of transportation,” it warned.

With early generations of automated vehicles already on roads and telematics equipped in many new cars, change is afoot and the nation’s leaders need to be prepared, says Driving Change, a report from the Senate Standing Committee on Transport and Communications.

Its 76-page document released at the end of January looked at how transportation will change in Canada in the future, noting how experts are calling for self-driving options in urban areas in 10-15 years. These changes will bring an abundance of opportunity – but action is required today.

Some of the opportunities, according to an estimate cited by the Senate, include economic benefits from automated vehicles, which would reach $65 billion annually in collision avoidance, increased productivity, reducing traffic congestion and savings in fuel costs.

But there will also be losses.

A number of sectors will be affected by vehicle technology, like the taxi, transportation and parking industries, which employ more than one million people. There are also risks from car hacking and the loss of personal privacy.

“Canada is ill-prepared for the fast-approaching future of transportation.”

On that last note, the Senate raised concerns around the data generated from connected cars and what corporations would do with that data.

“There is still time for Canada to put in place a robust plan that will maximize the advantages of automated and connected technology while addressing the risks,” the report said.

“But the government must act now.”

The committee made 16 recommendations to the federal government and a number of its agencies, ranging from co-ordinating and implementing a national strategy to empowering the privacy commissioner to investigate and enforce laws.

The Automotive Industries Association of Canada responded positively to the report, saying in an announcement that the Senate heard its concerns “loud and clear.”

The AIA said it will monitor two recommendations in particular – one to ensure the aftermarket continues to have access to needed data in order to offer services and the other to support retraining, skills upgrades and employment support for those who will face disruption.

Watch for more about this report on AutoServiceWorld.com.