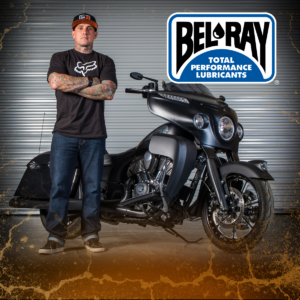 He will appear at a number of events representing the lubricants company, including the Hot Bike Tour and Sturgis Motorcycle Rally in Sturgis, S.D.

Hart is a long-time member of the motocross and motorcycle racing community. He helped establish freestyle motocross and the “Hart Attack” trick where he grips the seat with one hand, inverts their body and fully extends their legs above their head.

He has also claimed four medals — two golds — in freestyle motocross at the X Games.

“I’ve been using Bel-Ray for many years in supercross and motocross races with my team,” Hart said in a news release. “It only makes sense to extend this partnership to my V-twin motorcycles as well.”

“We’re thrilled to work with Carey Hart in 2017,” said Debby Neubauer, Bel-Ray’s vice president of marketing, adding that “we can’t wait to share his experiences with fans” this year.