Dave Fifield, president of Wakefield Canada, will serve as chairman of the associations's executive committee. 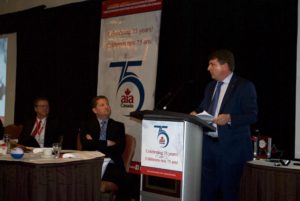 Dave Fifield is the new chairman of the Automotive Industries Association of Canada (AIA).

Elected this week at the association’s annual general meeting, the president of Wakefield Canada said he is honored to assume the role of chairman as the AIA’s celebrates its 75 anniversary and continues to evolve in the face of a changing industry.

“The automotive industry has changed significantly (since AIA was founded in 1942),” he said. “The last few years for AIA have been nothing short of transformational.”

He pointed out that the association’s membership is more diverse and inclusive than ever, having expanded its scope to represent the collision industry and major retailers in addition to its original constituency of warehouse-distributors, jobbers, and aftermarket parts manufacturers.

“The future is bright for the automotive aftermarket,” he said. “The fundamentals of our business are solid.”

Nevertheless there are significant disruptors on the horizon which require our attention – developments such as ride sharing, autonomous vehicles, electric vehicles, telematics, and 3D printing.

“These all have an impact on the future of the market,” he said. “Today’s market is complex, and the challenges will require our A-game. It will also require us to work collaboratively at scale if we hope to be successful.”

The biggest driver of change in our industry, he said, is that cars are built better and they last longer.

“That’s a fundamental fact in our business and we all have to come to grips with that reality.”

Fifield took the time to show examples of poor do-it-yourself automotive work, and reminded the audience that “underperformed and poorly performed maintenance remains one of our biggest opportunities.”

He will be joined on the AIA’s executive committee for 2017-2018 by Brent Hesje of Fountain Tire (first vice-chairman), Jason Best of Spectra Premium (second vice-chairman), and Doug Reevey of Autotec Inc. (immediate past chairman).

Reevey offered his observations after serving his year as chairman. He said engaging youth will be critical to the health of the industry moving forward, and pointed out that the Canadian public relies on a strong aftermarket to keep the national fleet rolling.