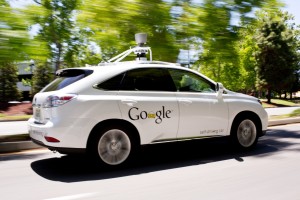 For the first time, one of Google’s self-driving cars, a modified Lexus SUV, in Mountain View California, caused a crash. Detecting a pile of sandbags surrounding a storm drain in its path, the car moved into the center lane to avoid the hazard. Three seconds later it collided with the side of a bus. According to the accident report, the Lexus’s test driver saw the bus but assumed the bus driver would slow down to allow the SUV to continue.

It was not the project’s first crash, but it was the first caused in part by nonhuman error (most incidents involve the driverless cars getting rear-ended by human drivers not paying attention at traffic lights). The episode shines a light on an ever looming gray area in our robotic future: Who is responsible—and pays for damages—when an autonomous vehicle crashes?

The sense of urgency to find clear answers to this and other self-driving vehicle questions is growing. Automakers and policy experts have worried that a lack of consistent national regulation would make rolling out these cars across all 50 states nearly impossible. To spur progress, the Obama administration asked the Department of Transportation to propose complete national testing and safety standards by this summer. But as far as the question of accountability and liability goes, we might already be homing in on an answer, one that points to a shift in how the root cause of damage is assessed: When a computerized driver replaces a human one, experts say the companies behind the software and hardware sit in the legal liability chain—not the car owner or the person’s insurance company. Eventually, and inevitably, the carmakers will have to take the blame.

Self-driving pioneers, in fact, are starting to make the switch. Last October, Volvo declared that it would pay for any injuries or property damage caused by its fully autonomous IntelliSafe Autopilot system, which is scheduled to debut in the company’s cars by 2020. The thinking behind the decision, explains Erik Coelingh, Volvo’s senior technical leader for safety and driver-support technologies, is that Autopilot will include so many redundant and backup systems—duplicate cameras, radars, batteries, brakes, computers, steering actuators—that a human driver will never need to intervene and thus cannot be at fault. “Whatever system fails, the car should still have the ability to bring itself to a safe stop,” he says.

The proliferation of vehicles already on the road with partial automation shows how quickly the scenario that Coelingh describes is coming about. A growing number of cars include crash-imminent braking systems, which rely on optics to detect potential front-end impacts and proactively apply brakes. Audi, BMW and others have developed cars that can parallel park themselves. And later this year Volvo will roll out the U.S.’s first semiautonomous highway driving feature, called Pilot Assist, on the 2017 S90 sedan. The system uses a windshield-mounted computer equipped with a camera and radar to automatically accelerate, decelerate, avoid obstacles and stay in a lane at speeds of up to 80 miles per hour.


5 Comments » for Who’s Responsible When a Self-Driving Car Crashes?