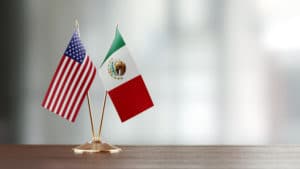 Donald Trump said Monday that the United States and Mexico have reached a bilateral trade “understanding” that could lead to an overhaul – or perhaps the termination – of the three-country North American Free Trade Agreement.

The U.S. president also invited Canada to rejoin trade negotiations with its NAFTA partners – while also threatening Ottawa that if it can’t reach a deal then he will impose devastating tariffs on automotive imports.

“But one way or the other, we have a deal with Canada. It will either be a tariff on cars, or it will be a negotiated deal; and frankly a tariff on cars is a much easier way to go, but perhaps the other would be much better for Canada.”

Through an interpreter, Pena Nieto said several times that he hoped Canada would be part of an eventual trilateral agreement.

Trump also wants to re-baptize the trade agreement with Mexico.

“I like to call this deal the United States-Mexico trade agreement,” he said.

“I think it’s an elegant name. I think NAFTA has a lot of bad connotations for the United States because it was a rip off.”

Trump suggested he would terminate the 24-year-old trilateral pact with Canada and Mexico – a pact that has been critical for the Canadian economy – and replace it.

“When that happens, I can’t quite tell you, it depends on what the timetable is with Congress, but I’ll be terminating the existing deal and going into this deal,” he said.

Following Trump’s announcement, Trudeau’s office issued a statement saying the prime minister spoke with Pena Nieto on Sunday about NAFTA’s renegotiation and “shared their commitment to reaching a successful conclusion to this agreement for all three parties.”

Trump also called on Canada to negotiate fairly, especially when it comes to dairy products.

Canada has been absent from the NAFTA bargaining table since trilateral talks paused last spring.

It’s unclear when Canada will re-enter trade talks with the U.S. and Mexico. Foreign Affairs Minister Chrystia Freeland is in Europe this week on diplomatic visits to Germany, Ukraine and France.

Observers have raised concerns that Canada’s absence from the talks could put Ottawa in a position where it might be pressured into accepting a deal reached between the U.S. and Mexico.

Trudeau has insisted his government will only sign a deal that’s good for Canada.

A spokesman for Freeland said Monday that “Canada is encouraged by the continued optimism shown by our negotiating partners” and that “progress between Mexico and the United States is a necessary requirement for any renewed NAFTA agreement.”

Adam Austen also wrote in an email that Canada would continue to work toward a modernized NAFTA.