"You have relit the spark of hope for our families. I cannot thank you enough," says the CEO of the Muscular Dystrophy Association of Canada. 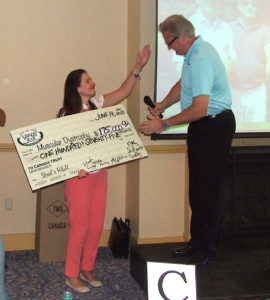 The CEO of Muscular Dystrophy Association of Canada (MDC) says Shad’s R&R — the aftermarket golf tournament that has raised over $5 million for muscular dystrophy research — is giving hope to many Canadian families touched by the disease.

“We are on the precipice of the new world in neuro-muscular disorders. That’s what your $5 million has done,” Barbara Stead-Coyle told over 250 golfers who played at this year’s event at Station Creek Golf Club in Gormley, Ont. “You have relit the spark of hope for our families. I cannot thank you enough.”

Stead-Coyle received this year’s donation of $175,000, saying it would be put to good use fighting the disease and helping families affected by it.

“The good news is that for the first time ever there are new treatments coming to the market. We have a remarkable drug called Spinraza for SMA (spinal muscular atrophy) children. The cost is $750,000 a year. Not paid for by the government. Muscular Dystrophy Canada is there. We are in government offices every day, lobbying, advocating, fighting for these children.”

Also on hand to thank the Shad’s golfers was Dr. Cynthia Gagnon, associate professor at the faculty of medicine and health sciences at the University of Sherbrooke.

Shad’s R&R has been raising money for muscular dystrophy for 45 years now. Founded by a group of aftermarket salesmen, it has grown into MDC’s largest single-day fundraisers, and is an annual highlight for hundreds of aftermarket professionals.