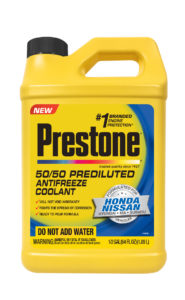 New antifreeze coolants have been released by Prestone that have been customized for European and Asian vehicles. There are three options – one for Honda and Nissan, another for Lexus, Toyota, Scion and a third for European vehicles like Volkswagen, Audi, BMW and others. The idea behind three different formulas is to give customers confidence that they are using antifreeze coolants that are particular to their vehicle manufacturers’ specification, the company said in an announcement. The coolants will be sold exclusively at Walmart locations in a half-gallon jug with additional retailers announced later.