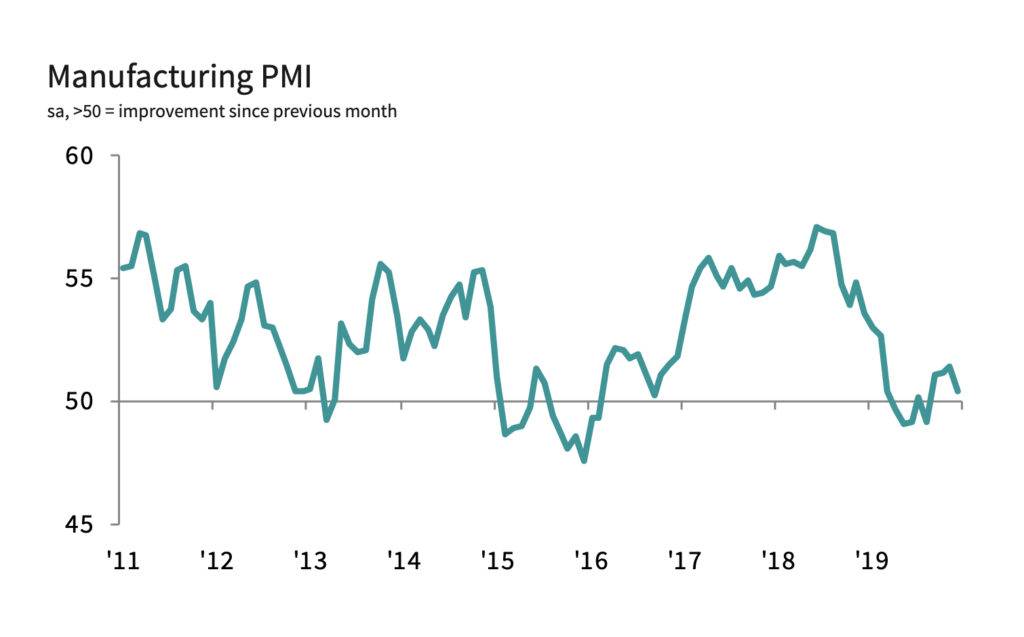 Business optimism in Canada dropped to its weakest level since February 2016, according to the IHS Markit Canada Manufacturing Purchasing Managers’ Index (PMI).

December 2019 data revealed slower output growth amid falling new orders, a subdued rate of job creation, and a setback for the recent recovery in manufacturing growth from the low point seen in the middle of 2019. This was highlighted by the near-stagnation of production volumes and a renewed downturn in order books during the latest survey period.

The latest survey meanwhile signalled the lowest degree of confidence about year-ahead prospects for production growth since February 2016.

“December data revealed a disappointing end to 2019 for the Canadian manufacturing sector as the steady recovery in production volumes stalled, while new orders fell back into decline,” said Tim Moore, economics associate director at IHS Markit.

At 50.4 in December, down from 51.4 in the previous month, the headline seasonally adjusted index signalled the weakest overall manufacturing performance since August. The latest reading was only fractionally above the crucial 50.0 no-change mark.

Measured overall, production volumes across the manufacturing sector increased fractionally in December, with the rate of expansion the slowest for three months. The near-stalling of output levels reflected a drop in new work at the end of 2019. Although only marginal, the decline in new business contrasted with modest growth in the previous three months.

Survey respondents noted that subdued demand across the automotive and energy sectors was a factor weighing on manufacturing order books in December. Some firms also commented on the need to initiate discounting strategies to stimulate customer demand.

Export sales also dropped at the end of the year, with manufacturers often citing difficulties winning new work in US markets. On a more positive note, there were a number of reports that demand from China had improved.

Employment levels increased at the weakest pace for four months in December. Softer rises in payroll numbers were partly linked to cost cutting and concerns about the demand outlook. Backlogs of work dropped again at the end of 2019, while manufacturers reported their weakest growth projections for almost four years.

Supply chain pressures persisted during the latest survey period, with lead times from vendors lengthening to the greatest degree since February. A number of manufacturers cited delays with shipments due to rail strikes and a lack of alternative transport capacity, which also contributed to depleted inventories of materials at their plants.

The IHS Markit Canada Manufacturing PMI is compiled by IHS Markit from responses to questionnaires sent to purchasing managers in a panel of around 400 manufacturers. The panel is stratified by detailed sector and company workforce size, based on contributions to GDP.