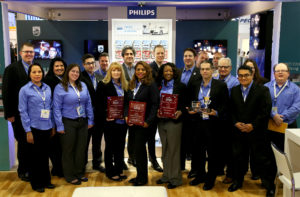 Four marketing awards are being added to the Lumileds mantle.

The awards were presented during the 2017 Automotive Communications Awards ceremony, which was sponsored by the Car Care Council’s Women’s Board and the Import Vehicle Community’s Import Product and Marketing Awards.

The new Philips Ultinon line of LED lighting was named the Best New Product at the Import Vehicle Community’s Import Product and Marketing Awards and also recognizes for Best Packaging during the Automotive Communications Awards.

The Philips Bulb Look Up received top honours for the Best Website (Business to Consumer). In 2017, there have been over 156,000 clicks to online retailers.

The Philips Turn On Turn Heads campaign won the award for the Best Digital Display Ad.