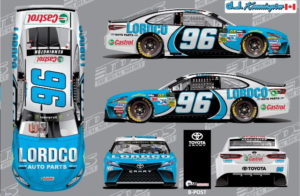 D.J. Kennington’s Toyota Camry that will race in the Daytona 500 on Feb. 26

Canadian driver D.J. Kennington will be part of the Daytona 500, the biggest stock car race in the world.

The St. Thomas, Ont. native will be taking part in the big race for the first time in his career, but he isn’t worried about the challenge. “While this will be my first outing in a cup car at Daytona, I have a lot of experience racing and drafting there, so there shouldn’t be a big learning curve,” he said in an announcement.

Kennington is backed by Lordo Auto Parts — the first time they’ve sponsored a driver in the race, according to the announcement — and Castrol (Wakefield Canada).

His “Toyota Camry will be prepared by Gaunt Brothers Racing, whose principals got their start in the Ontario stock car scene,” the announcement said.

He is a two-time champion of Canada’s NASCAR series and has competed in U.S.-based Xfinity and Camping World Truck Series, according to the announcement. Last fall, Kennington took part in the Monster Energy NASCAR Cup Series in Phoenix. It was his first time being part of the event.

With all this experience under his belt, the 39-year-old is ready to take on the challenge of Daytona.

“I made my first Cup Series start in Phoenix last November but I’ve had 55 combined starts in the Xfinity and Camping World Series,” Kennington said. “And all the while, I’ve been racing in Canada’s NASCAR series with sponsorship from Castrol.

“I’m definitely ready to take this on. I’m excited to be running the first race with Monster Energy as the series’ sponsor, and I love how the program came together with my partners Castrol, Lordco and the Gaunts.”

The announcement also noted that “Kennington’s Toyota will be dedicated to the memory of Lordco founder, the late Ed Coates, a truly proud Canadian and NASCAR fan who considered the Daytona 500 to be his favorite motorsport event.”

Castrol’s relationship with Kennington dates back more than 20 years to when the racer was just a teenager. “We’ve sponsored D.J. since he was 16 and Lordco is one of our most important customers in Western Canada,” said Natalee Davis, the sponsorships and promotions marketing manager at Wakefield Canada. It’s a wonderful opportunity and co-partnership.”

Backed with such Canadian commitment, Kennington expects a good showing. “This team is all-set to do well at Daytona. There hasn’t been a Canadian driver at the event in ages and we’re ready to rock ‘n’ roll.”