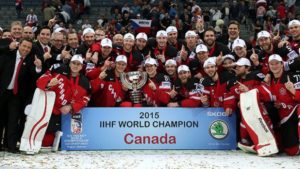 Liqui Moly has announced that is has jumped on board as the official sponsor of the 2017 IIHF World Championship, a hockey tournament hosted by France and Germany.

The tournament runs from May 5-21 and features teams from countries across Europe, as well a team from Canada, the Unites States and Russia. Canada has won the last two tournaments.

The effort wraps up Liqui Moly’s efforts of winter sports sponsorships, the company said in a press release. The tournament is especially important to Liqui Moly as it will be featured in its key markets throughout the continent. “Russia is by far our biggest export market, while North America is the market where we see huge potential and want to achieve good growth,” said marketing director Peter Baumann.

At the arenas, the company logo will be featured on rinkside boards for visibility to the television-watching audience and on printed materials of the tournament. In-arena advertising will also be done.

“In this way we have introduced millions of spectators to Liqi Moly – people we wouldn’t otherwise reach with our involvement in motor racing,” says Peter Baumann.