The points of the Fraud Triangle 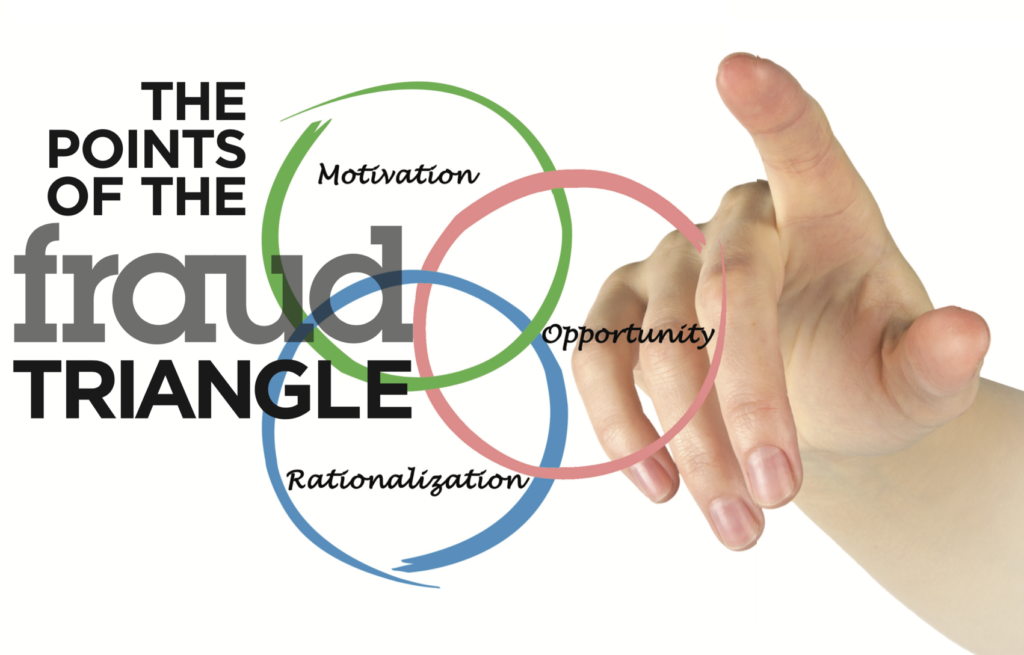 What does a fraudster look like? Do they wear a ski mask and gloves? A pulled-down baseball hat and sunglasses?

No, not really. To better understand a crook, look at the person beside you. That’s the typical profile of today’s fraudsters –the average, everyday person. They’re mostly law-abiding citizens who typically would never think to rip off their neighbour.

Boiled down, Bernie Madoff was your typical guy. The most famous fraudster in recent memory was a well-respected businessman. He was a former chairman of NASDAQ and well known around business circles as the head of a securities investment firm. What people didn’t know what was that he was running an elaborate Ponzi scheme.

In the March 2018 issue of Jobber News, we told you about Gregory Macdonald who worked for a Nova Scotia NAPA jobber. As a manager with the store, he stole about $500,000 over a 10-year period. Its owner, Bruce Dupuis, spent tens of thousands of dollars and a couple of years cleaning up the mess. Macdonald was a trusted person in the business, hence his role. It was a shock to learn of the crime, Dupuis said.

“The best fraudsters are very hard to identify. They’re all normal people,”said Ari Kashton, a forensic accountant at Kashton Valuations & Financial Forensics in Toronto. “It’s a scary world out there because you never quite know where the fraudster is going to come from. They can be the nicest people in the world. Or they can be the most devious, dastardly people. But they come across as charming.”

“He was in a position
of absolute trust.
We didn’t question
what he did.
We trusted him
to act in the
best interest
of the company
and to do his job properly.”
—Bruce Dupuis, NAPA jobber

However, when these “charming”people are put in the right circumstances they may find themselves staring at what experts call the fraud triangle –three situations that can lead to dishonesty: motivation, opportunity and rationalization. The term was coined by American sociologist Donald Cressey.

And the triangle isn’t hard to create, especially when working for a small business like a jobber.

To be motivated, one just might be in need of some cash as holiday bills pile up, for example, or they desire a more extravagant lifestyle. The opportunity may be at their fingertips –a store may not have enough internal controls to protect itself from fraud. Or maybe someone has the right access to the right tools to pull off a scheme.

The third point, rationalization, could be the easiest one for fraudsters to come by –and the most dangerous. A person just needs justification in their mind that what they’re doing is acceptable in order to eliminate any guilty feelings.

“Everything happens in the rationalization process,”said Marc Tassé, an anti-corruption, ethics and compliance expert at the Canadian Centre of Excellence for Anti-Corruption in Ottawa. “Depending on which part of his life he is in or depending on his financial situation, he will justify doing something wrong.”

For example, the fraudster might believe that even though his bosses make more money, they are not as competent, or they don’t work as hard as he does. Or that stealing a little bit of cash wouldn’t nearly be as bad as some of the things his bosses do. Or maybe he feels everyone takes a little bit from the pot, so why can’t he? Sometimes, he just wants to do it because he can, similar to how some hackers shut down websites just to show good they are and get their own 15 minutes of fame.

“Everybody has financial pressures and sometimes they see an opportunity for themselves. Everybody can use extra money,”Kashton said. “Later on, they will rationalize their actions because, for most people, we have a need to feel good about ourselves.”

Once the rationalization process crystalizes, there’s usually no going back.

“[Rationalization] is sort of blurring the line of what’s right and wrong, good and evil. Once you’ve blurred that line …evil can become good,”Kashton said. “And it is the scariest thing of the whole process where people essentially lose their fundamental ethics and then say, ‘Well, you know, there’s a purpose to all this.’”

Sometimes, they don’t mean to be malicious. It’s a behaviour often found in gamblers –if they play another few hands of poker, they can win their money back.

Similarly, the fraudster thinks, “I was always a hard worker but I’m just having a tough financial situation right now and I’ll be able to get over it,”Tassésaid. They intend to pay the money back but they can’t.

An employer can’t do much to stop the rationalization process, but they certainly can shut the door on opportunities. Tassérecommended to rotate employees from role to role. One person in one spot for too long is an “inherent risk”and could create opportunities for fraud.

“You say, ‘OK, well, you’ve been working for two years in shipping and receiving and now we’re going to have you work with accounts receivable,’”he explained. “So it’s a completely different [role].”

Fraudsters are good at gaining your trust. In fact, it’s their greatest weapon. As Dupuis told Jobber News, his fraudster was a long-time employee and there was never a reason to think poorly of him.

“He was in a position of absolute trust,”Dupuis said. “We didn’t question what he did. We trusted him to act in the best interest of the company and to do his job properly.”

“Generally, the people in the most trusted positions who have the most access to everything actually commit the frauds,”he said. “They end up abusing that trust that was developed in the normal fashion.”

The pieces that come together to make a fraudster:

Motivation: Pressure that creates the need for the crime. A person has a financial problem, such as mounting bill payments or desires of grandeur lifestyle, that they need to resolve through illegitimate means.

Opportunity: A method by which a person can commit the crime. They are in a position of trust that they abuse to resolve the financial problem. The person perceives the risk of getting caught as low.

Rationalization: Often referred to as the most dangerous leg of the triangle. Fraudsters will view themselves as honest individuals in unfortunate circumstances and justify the crime they are committing.