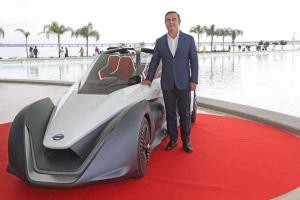 During the 2013 Tokyo Motor Show, Nissan unveiled the BladeGlider prototype, an all-electric, zero emissions sports car concept. This year, Nissan has produced two working prototypes, and have made their first appearance in Rio de Janeiro, just in time for the 2016 Summer Olympics.

“These prototypes epitomize Nissan’s drive to expand its Intelligent Mobility strategy, where driving pleasure combines with environmental responsibility. Nissan believes that enthusiast should look forward to a zero emission future and Nissan BladeGlider is a perfect demonstration of that. It’s the electric vehicle for car lovers,” said Carlos Ghosn, President and Chief Executive Officer of Nissan Motor Co., Ltd.

Nissan calls this concept the BladeGlider because of the car’s, “near-silent performance of electric powertrain” and its slim, streamlined shape. Nissan adds that this concept is a demonstration model that combines intelligent mobility, green technologies and sports-car capabilities.

It features an advanced chassis which, according to Nissan, was made for aerodynamic efficiency and handling. A torque system comes with three settings, namely Off, Agile, and Drift Mode plus a wheel-mounted control system feeds info to a special display. Power is provided by two 130 kw electric motors and is sent to the rear wheels. According to Nissan, the BladeGlider has a top speed of 190 km/h and 0-100 km/h in less than 5 seconds.

Inside, there is seating for three and there are four point safety harnesses for each occupant. Its seats are also trimmed in a fabric and epoxy resin along with a central driving position for extended leg room for the passengers behind.

With Nissan being the official support vehicle of the 2016 Olympics, two Nissan BladeGilder are currently in the city. The first one will be on static display in while the second can be enjoyed by Media and VIPs for this year’s games.