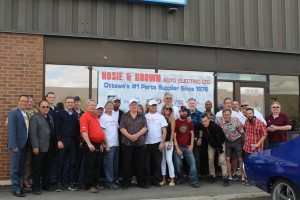 Back in 1976 Hosie and Brown Auto electric started with five employees. Today they have over 40 staff and the company is still doing business with its traditional approach to customer service. Hosie and Brown is an AC Delco Distributorship (since opening in 1976) and became a member of Group Monaco in 2008.

“Our affiliation for the Monaco group was a godsend.  AC Delco is a great company too.  They both back us up no argument. We are now able to be more competitive to the people that sell on price alone.  We may not match it but we are close. I have four daughters that aren’t interested in the business and  I am 57  and I  don’t mind working the long hours but if I want an escape plan, now I have one.  My family is still a 50% owner and Group Monaco owns the other 50%,” explains owner Rodd Brown.

The main store is located in a small industrial area on Gosset Street, and houses over 9,000 sq. ft of usable space that, more often than not, is filled to capacity. “If we don’t have it on hand, 9 out of 10 times you’ll still get the part the same day because we can draw from unlimited resources around the immediate Ottawa area,” adds Brown.

Rodd took over the company after his father died in 1999, and is easily one of the more recognized, and respected figures in the Ottawa area automotive market. Their second store is located in Nepean Ontario. “The bottom line is we believe we give the best service in this city.  We have the best staff with at least six employees who have been here for at least 25 years.

“We went from two stores with under a million dollars in sales to two stores with about $4 million in sales. We moved to the west end which made a big difference. The other jobbers out there weren’t expecting the competition they got from us on service,” adds Brown.

“We don’t sell by price, we sell by back up. Any problems with warranty are dealt with within an hour of landing in the building. We are known for that.  If you send your credit back at 5pm at night, it’s in your bin first thing in the morning. We have two or three guys that stay till 8 o’clock at night at month end to make sure all the credits in the building are done.  It’s very important here. It was my dad’s rule and it’s my rule.  Credits have to be done before anything,” explains Brown.