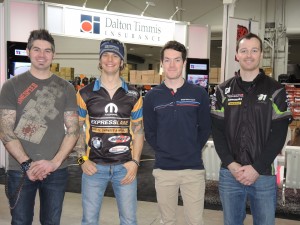 “The Dalton Timmis Group is excited to serve as the presenting sponsor for Mopar CSBK on TSN,” explained Dan Avon, vice president of Personal Lines, Partner at Dalton Timmis Group. “We think the National scope of the TSN Coverage and Race Series are an ideal fit for our range of insurance products.

“We want to illustrate that the Dalton Timmis Group goes beyond motorcycle insurance, and can fulfill other insurance and niche requirements for our customers. We’re excited to be working with the competitors, other sponsors and fans this summer.”

Dalton Timmis Group will also back a new Qualifying bonus initiative, the Dalton Timmis Insurance Top Qualifier Award. The top five qualifiers from each event’s Pro Superbike Feature class will share a $2,000 purse at each round, and an overall 2016 Dalton Timmis Top Qualifier will be crowned at the final round of the 2016 tour at Canadian Tire Motorsport Park, Friday, August 19.

Dalton Timmis is Canada’s largest motorcycle insurance broker, and are proud of their long history of support for the sport of motorcycling in Canada. They can also cover competition participants, race teams and sponsors, as well as off-track and storage.

The Dalton Timmis Group support of the Mopar CSBK National Championship tour will kick off at the end of May at Shannonville Motorsport Park, east of Belleville, Ont. The opening round of the series marks the 40th anniversary of motorcycle competition at the former Nelson International Raceway, and the Dalton Timmis Top Qualifier Awards will be presented on Saturday afternoon, May 28, with the opening Feature race the following day.

Thirty-seven-year-old Jordan Szoke is the pre-season favourite. The BMW Motorrad racer was undefeated on his way to the overall National crown in 2015. Szoke has already earned the coveted Canada Cup Trophy a record 10 times.