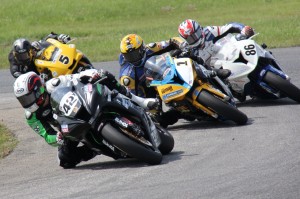 Defending Mopar Canadian Superbike champion Jordan Szoke picked up where he had left off at the end of the 2015 season, winning the opening round of the 2016 campaign at Shannonville Motorsport Park on Sunday.

The 37-year-old resident of Lynden, Ont., riding the Express Lane / Motovan / BMW Motorrad BMW S1000RR, took the lead from Matt McBride on lap 18 of the 22-lap race and held on for a 2.404-sec. victory over Belfountain, Ont.’s Kenny Riedmann. After leading most of the race Mississauga, Ont.’s McBride settled for third.

“I’ve still got some fight left in me,” said Szoke, who swept every race on his way to a 10th Canadian Superbike title last year. “But we’ve got a long way to go yet. It’s going to be a long, tough year.”

McBride took the lead from Riedmann at the end of the backstraight on lap 2 while Szoke began the work of moving up to the front. He passed Young into Allen’s Corner on lap 3, then took Riedmann at the same spot on lap 6. From there he started erasing McBride’s lead, which had grown to almost two and a half seconds.

“I was having a problem and I couldn’t get a good drive onto the backstraight,” explained Szoke, who has now won a record 53 Canadian Superbike events. “So I knew I’d have to win it on other parts of the track. But overall I knew we had a really good bike for the race and the hot and greasy track conditions.”

Szoke turned the fastest lap of the race, a 1:04.913, on lap 8 and he was on McBride’s tail by the time the halfway flags came out on lap 11. The defending champ finally made his move through the Esses before the backstraight on the 18th lap.

While McBride and Szoke battled for the lead Riedmann gradually reeled in the pair and he was able to snatch second spot from McBride just two laps from the finish.

“I tried sticking with Matt [after he took the lead] but I was making mistakes and I decided to sit back and see what I could save for the end,” said Riedmann, who finished second to Szoke in last year’s Mopar CSBK title chase. “On the last couple of laps I found I had enough to make a push, although I was unable to stick with Jordan when he came by.

“But it’s good points for the championship and that’s our goal for the season.”

McBride was battling front end chatter from the halfway point of the race on and admitted he had little left to challenge Szoke or Riedmann at the end.

“I didn’t get off the line great but I got through [turn] 2 really well and I wanted to get a good advantage as quickly as possible, because I knew Jordan and Kenny would be coming after me. I’m happy to finish and get this result. The team’s put a lot of work into this.”

After losing third place to Szoke, Young found himself in a battle with the Trip Dub Racing / Burkett Freight Solutions / Z1 Tuning Yamaha YZF-R1 of Bodhi Edie. The Warman, Sask. racer got ahead of Young, who was battling fading front brakes, on lap 16, only to fall at the last turn three laps later and allow Young to pick up fourth place points.

Trevor Daley of Mississauga, Ont. salvaged seventh on his OneSpeed Yamaha YZF-R1 despite running off the end of the backstraight on the 16th lap.

Edie salvaged ninth after his crash, and Chris Murray-Audain completed the top 10 finishers aboard the Onestop Dealer Services BMW S1000RR.

Murray-Audain only just beat the BMW S1000RR of St-Isidore de Laprairie, Que.’s Samuel Trepannier, who did well to take 11th in his Pro debut after a practice crash on Saturday left him starting from the back of the 22-rider Superbike field.

After running as far back as fourth in the early laps Taylor passed Casas for the runner-up spot just five laps from the end of the 18-lap race and held off the Peterborough, Ont. racer by just 0.126 secs. at the finish.

Montreal’s Jean-Marc Bilger won the Magneti Marelli Amateur Superbike race on his BMW S1000RR, finishing just 0.884 secs. ahead of the Suzuki GSX-R1000 ridden by Mathiew Tremblay of St-Anable, Que. Ottawa’s Chris Brent placed third on a Honda CBR600RR, just a fraction of a second behind Tremblay.

Brent led all the way to claim the Shoei Premium Helmets Amateur Sport Bike win. Pickering, Ont.’s Chris Hood placed second, 4.076 secs. behind on a Kawasaki ZX-6R while Jean-Francois Aubin of St-Jerome, Que. was a close third on a Suzuki GSX-R600.

Oakville, Ont.’s Jared Walker bounced back from a crash in Saturday’s Kawasaki Ninja 300 Spec Series race to claim his second win of the season on Sunday. Brandon Pemberton of Windsor, N.S. finished second, 3.797 secs. behind Walker while points leader Eric Quintin of Ile Perrot, Que. settled for third after running off the track while in the thick of the battle for the lead.

Mopar Pro Superbike action from this weekend will premiere on TSN1 on June 14 at 7:30 p.m., while video coverage from the Liqui Moly Pro Sport Bike race will be available on the official series website, csbk.ca, on Monday morning.

The Mopar Canadian Superbike Championship resumes at Autodrome St-Eustache in St-Eustache, Que. June 24-26. This event will include a doubleheader for the Pro Superbike class.