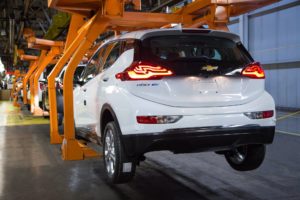 General Motors Co has increased production of its new Chevrolet Bolt and is on track to start delivering the electric cars by the end of the year.

This means that, barring a last-minute stumble, GM will be first to offer an electric car with more than 200 miles of driving range at a starting price of less than $40,000 before tax credits.

The $37,495 Bolt, with a 238-mile range, is a compact, utilitarian hatchback that includes a thin front seat for increased rear-seat legroom, aimed at making the car attractive to drivers of ride-hailing services.

GM’s Maven car-sharing operation will receive Bolts to offer drivers who want to work for GM’s ride-hailing partner, Lyft. Company officials will not say how many customers have tried to order Bolts from dealers.

GM is also hedging its bets on production targets after getting burned in the past by over-estimating demand for electric or hybrid cars. Sales of electric and plug-in hybrid cars represent just 1% of the U.S. light vehicle market, despite government efforts to promote cleaner cars.