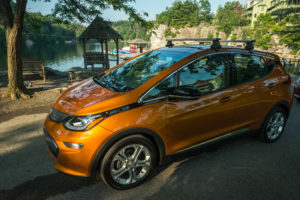 General Motors Co. expects to carry passengers and deliver goods with self-driving vehicles in big cities sometime in 2019, telling investors it’s moving quickly and plans to be ahead of other automakers and tech companies.

The Detroit automaker made the announcement at an investor presentation in San Francisco Thursday, saying that based on its current rate of change, it expects “commercial launch at scale” of the autonomous vehicles within the next year or so. The vehicles would not have a human backup driver, the company said.

Company executives didn’t say how many vehicles GM would deploy or what cities they would be in, but they were clear that the company plans to run ride-hailing and delivery services and quickly make money off them – at higher profit margins than it now makes from selling cars and trucks.

GM said it is important to be first to get the self-driving electric vehicles on the road so the rider experience can be improved quickly and give the company a competitive advantage. GM said there still was much more difficult engineering work to do. And it’s not quite clear yet whether the automaker will be first.

Google’s Waymo division is testing self-driving minivans in Phoenix, carrying passengers without a backup driver in the front seat. An employee in the back will be able to stop the vehicle by pushing a button but won’t be able to steer the vehicle. Waymo plans to announce a commercial service in the next few months.

German automaker Daimler AG has teamed up with supplier Bosch to develop autonomous taxis by 2020. And Ford plans to have a self-driving car available for ride-hailing services by 2021.

GM President Dan Ammann said the first commercial use of EVs would be in ride-sharing. He wouldn’t say if the service would involve ride-hailing company Lyft, in which GM has invested $500 million. More details, he said, would come closer to 2019.

GM’s Cruise Automation unit is testing autonomous Chevrolet Bolt electric vehicles with human backup drivers in San Francisco, Detroit and Phoenix, and has plans to test in Manhattan next year.

The automaker says it’s focused on deploying self-driving vehicles safely, but it also wants to beat rivals to market. Ammann said GM is in the lead to deploy the vehicles in large numbers. Once they’re on the road, the vehicles’ computers will constantly learn and improve.

“Getting first onto that learning curve is pretty important,” he said.

GM estimated the total ride-sharing market could reach $1.6 trillion once it hits 75 per cent of all rides in the U.S. Now it’s less than 1 per cent. Ammann said GM now makes about $30,000 per vehicle by selling them, but said ride-hailing and delivery profits could rise to hundreds of thousands of dollars per vehicle.

Because GM has software and sensor development, as well as manufacturing, it can roll out autonomous vehicles cheaper than competitors, the company said.

Investors apparently weren’t impressed by the presentation or had already built autonomous vehicles into GM’s stock price. After the afternoon presentation, shares of GM fell 1.8 per cent to close at $43.04 while the broader markets ended higher.