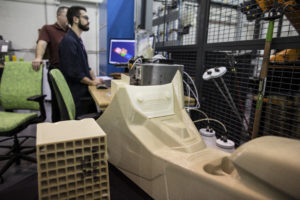 It may not be much longer until 3D-printed car parts are on the streets. Ford is testing 3D printing large-scale single-piece auto parts, such as spoilers.

The company announced they are making the move “for prototyping and future production vehicles.” Ford is using a printer from Stratysys, a 3D printer manufacturer, capable of printing just about any shape and size.

If successful, a breakthrough could be in the works. 3D printed parts would provide “a more efficient, affordable way to create tooling, prototype parts and components for low-volume vehicles such as Ford Performance products, as well as personalized car parts,” Ford said in a press release.

And the benefits include cash savings for consumers. “3D printing could bring immense benefits for automotive production, including the ability to produce lighter-weight parts that could lead to greater fuel efficiency,” Ford said. “A 3D-printed spoiler, for instance, may weigh less than half its cast metal counterpart.”

Furthermore, instead of waiting months for a typical prototype to be produced, a 3D can be done in a matter of days.

That said, there are limitations. For example, low-volume production parts can be easily produced. But mass-production parts are tougher. The printing process “is not yet fast enough for high-volume manufacturing” and would be more expensive.

The 3D printer system is being housed at the Ford Research and Innovation Center in Dearborn, Mich.

It works by transferring part specifications to the printer’s computer through a design program. Once analyzed, the device prints one layer of material at a time. It gradually stacks layers into the finished product. The machine can run for hours and even days unsupervised since systems are in place to replenish supply material.


2 Comments » for Ford putting 3D printing to the test