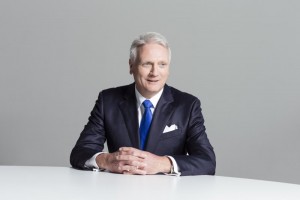 As part of decentralization of its company activities, Volkswagen Group is strengthening the North American region and is combining its activities in the USA, Mexico and Canada into the newly formed North American Region (NAR). The Supervisory Board has appointed Prof. Dr. Winfried Vahland to take over all responsibility for the North American Region. In this role as President and CEO of Volkswagen NAR, Prof. Dr. Winfried Vahland will be responsible for all Group activities in the newly formed region from 1 November 2015.

With the creation of the new North American Region (NAR), on top of the existing structure of the markets, Volkswagen Group is strengthening its activities in the USA, Mexico and Canada. The step is a further measure in the process of decentralizing managerial responsibility, and it creates another strong pillar in the global structure of the group, in addition to the European and Chinese regions. The aim among other things is to have the ability to react better to customer demands and tastes in the future; closer proximity to the markets and their customers will enable this. Having recently led the Chinese region and the SKODA brand to success in his roles as Group CEO for China and SKODA CEO, Winfried Vahland is one of the group’s best managers to take responsibility for the new region. As NAR president, he will be a member of the Volkswagen Passenger Car brand’s Board of Management. He will take over his new NAR role on November 1, 2015. The exact structure of the NAR is currently being developed.

Prof. Dr. Winfried Vahland graduated from the Technical University Darmstadt with a major in Mechanical Engineering and Economics, and began his professional career with GM in 1984. He joined Audi AG in 1990 and Volkswagen AG in 1993. From 1997, he was vice president for Volkswagen in Brazil. He was appointed Member of SKODA AUTO’s Board of Management in 2002, and became vice chairman one year later. In 2005, he assumed the position of president and CEO of Volkswagen Group in China. More recently, since 2010, he has been responsible for the brand’s new direction as CEO of SKODA AUTO.