Who would you trust to look under your hood? 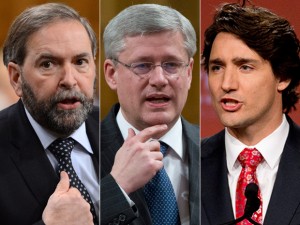 The experts at DesRosiers Automotive consultants thought of an unusual question for one of their many consumer polls.

In this election season, they asked which of the leaders of Canada’s major political parties would make the most trustworthy auto technician.

The question, asked of 1,500 vehicle owners across the country, went like this: If Stephen Harper, Justin Trudeau, and Tom Mulclair were technicians, who would you trust most to work on your vehicle?

“The results were interesting to say the least,” a release from the Canadian consulting firm states.

Respondents with newer vehicles (between one and three years old) were more likely to trust Thomas Mulcair. Owners of four- to 12-year-old vehicles preferred Stephen Harper. And those with vehicles 13 years old and older were most likely to choose Justin Trudeau.

So… what does all that mean?!

DesRosiers admits that the answer, while interesting, probably has very little relevance to political ability or governing intentions.

The only meaning the hardworking team of analysts at DesRosiers could decipher was that they were probably “a little too obsessed with understanding the thoughts of the Canadian vehicle owner.”

That, or maybe they have too much time on their hands.

The upcoming election, which is now entering the final month of campaigning, has seen a wide range of survey questions designed to illuminate and entertain voters.

You can probably put this particular poll in the “entertainment” camp. It probably shouldn’t be used to separate the wheat from the chaff in Ottawa!